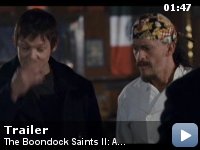 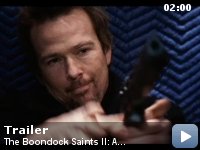 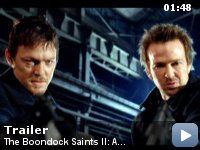 The MacManus brothers are living a quiet life in Ireland with their father, but when they learn their beloved priest has been killed by mob forces, the duo return to Boston to bring justice to those responsible.

Storyline
For the last 8 years the brothers have been living with their father on a sheep farm deep in isolated Ireland. One day their uncle tells them that they have been framed for the murder of a Bostonian Catholic priest. The boys must return to Boston to not only clear their names but find the men who framed them.

Versions of the "F" word were only used 136 times in the Boondocks Saints sequel, as opposed to 247 times in the original film.

Crew or equipment visible:
During the shootout replay at the bar, with Eunice walking down the middle of the mobsters, you can see the blood packs behind several of the guys' shirts and the mini-explosions that go off when they are triggered.

Connor:
How are the lads?

Murphy:
Bet'cha I can guess which one.

I got what I wanted as a fan. Others might not.


I am an avid fan of the original movie. While the concept of
vigilantism has been around for decades in film, it was never
communicated in such a way. The original movie was both entertaining,
and made certain statements about society. After all, isn't the first
purpose of film to entertain, and the second to create a message? If
the first movie focused on the message, the second seemed to focus more
on the entertainment. I'm OK with that. I already know what the McManus
boys are all about. Still, it was refreshing to see Il Duce's beginning
as a killer, even catching a glimpse of the first version of the gun
vest.


I was very skeptical of Clifton Collins Jr., thinking that he would
simply be a stand-in for Rocco. He wasn't. He had his own personality,
although I would have liked to have seen him involved in what the boys
were doing on a more personal level. It was like he was waiting for
them to come along just so he would have an excuse to kill mobsters.

The humor, slow-motion gunfights, and light-hearted moments were back.
During the first half, I sometimes felt the humor needed to be left
behind and the serious tone needed to come into play, but the second
half delivered that aspect very well, so it balances out in the end.

Julie Benz. Hmmmm. Attractive, intelligent, fun. But the southern
accent is so thick I had a hard time focusing on anything else.

I would like to make a special note of how ridiculous it is for someone
to dual-wield Desert Eagles, even if they have compensators attached.

Still, none of my complaints stopped me from enjoying the movie. I
watched it for what it is. An over the top-low(er) budget film that was
written to please fans of the original. I took it for what it is, and I
think I'm better off for it.

Many people criticize Troy and the films themselves, some going so far
as to say fans should go kill themselves. The internet, where everyone
thinks their opinion is fact, and everyone is a hardass. If you don't
like the movies, fine, but please, don't insult the intelligence of the
fans. Liking something that you don't doesn't make us any less
intelligent than you. If you want to pick on someone, pick on the
Twilight fans that think those movies are a real representation of love
and vampire mythology.

I hear Troy can be a bit of a douche. Maybe that's true, maybe it
isn't. What isn't true, is that the movies do not rip off of Tarantino.
I like Tarantino's work, but he was not the first person to do the
flashback narrative, dual wielding of pistols, slow motion gunfights,
etc. etc. That's like saying Halo was the first good shooter. All
movies borrow elements from one another. They're called themes and
archetypes.

All in all, an enjoyable film that gives the fans a taste of what
they've been missing for ten years. The editing is a little spotty at
times, and not everything hits the right beat, but simply to see the
boys in action again was enough to make me smile and laugh out loud,
and once again, isn't that what movies are supposed to do? Its supposed
to entertain us.

TagsCanada Ireland
Shrek Forever After
Sex and the City 2