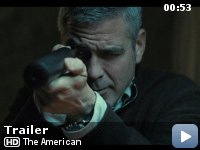 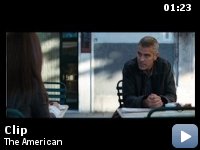 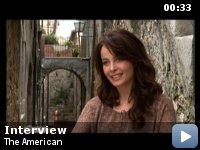 An assassin hides out in Italy for one last assignment.

Storyline
Alone among assassins, Jack is a master craftsman. When a job in Sweden ends more harshly than expected for this American abroad, he vows to his contact Pavel that his next assignment will be his last. Jack reports to the Italian countryside, where he holes up in a small town and relishes being away from death for a spell. The assignment, as specified by a Belgian woman, Mathilde, is in the offing as a weapon is constructed. Surprising himself, Jack seeks out the friendship of local priest Father Benedetto and pursues romance with local woman Clara. But by stepping out of the shadows, Jack may be tempting fate.

Being a celebrated stills photographer, Anton Corbijn was constantly taking pictures during the shoot. These were all ultimately presented in his book "Inside The American".

Errors made by characters (possibly deliberate errors by the filmmakers):
When packing the bullets in the candy box, and when handing over the candy box to the assassin, Jack doesn't wear gloves. Given how careful he's shown to be, one would expect him to leaving fingerprints, especially given that he knows the gun will most likely be left at the scene.

Ingrid:
You know, I thought I maybe drive into town. You want something?


Before anybody reading this review goes to see "The American," let me
give you some sincere advice. If you are expecting this to be another
Jason Bourne or James Bond-style of movie with elaborate action
sequences, tight pacing, and ear-throbbing music…you had better stay
away, for you will be sorely disappointed. The advertising campaign and
production photographs gives one the impression that George Clooney is
taking on a role in a movie like Liam Neeson did in that marvelously
powerful thriller "Taken" released in 2008. But that is not the case.
"The American" is shot on a foreign location, features a lot of foreign
dialect, and was made by a Dutch director with a mostly Italian cast.
In other words, it's not really an American action production. It's an
Italian melodrama and a really fascinating one at that.


Lots of questions are raised and very few of them are given answers
(detailed ones, at least) in this incredibly affecting thriller. We
know and find out very little about our protagonist (George Clooney)
who goes by two names: Jack and Edward. All we know is that he's a
trained killer, somebody wants him to manufacture a special rifle for
an assassination, and that's about it. We don't find out who exactly he
works for, and we really don't need to. Clooney is an American sent
into an Italian town for a last assignment. While he is waiting for the
right time, Clooney tries to avoid being shot at by assassins, and
begins a relationship with a prostitute (Violante Placido) which slowly
transforms from lust to love.

This is not really an action picture and to a certain extent, it's not
even really a thriller. "The American" is a transfixing character
study. We learn not about the George Clooney character's history, but
his integrity as a human being, which it not very much. Director Anton
Corbijn frequently has Clooney in a one-note personality and sets up
his cameras at a combination of close-ups and medium shots that remain
static as he performs rather mundane tasks as he waits for his
assignment to come through. One would assume that this would produce
tedium and boredom and for some people, it will be just that. But for
me, and those who really get involved, this is rather fascinating and
it doesn't drag on for very long at all.

However, the best scenes in the movie revolve around the relationship
between George Clooney and Violante Placido, who is effective and
charismatic as the prostitute who falls in love with him. The director
sets up earlier scenes of them having sex and then later changes the
direction to show them not as a pair of sex-starved individuals looking
for a way to kill a boring night, but as two human beings who care for
each other. At first, I was questioning the point of the Placido
character and I was griping, as I usually do, about the sex scenes and
how they seem, as usual, to have no purpose. But now in hindsight, I
commend the filmmakers for their choice. The sex scenes, for once, are
appropriate because they show how the relationship between these two
characters evolves from lecherousness to a pure and affectionate love.

Director Anton Corbijn and cinematographer Martin Ruhe have done a
superb job at crafting their nostalgia-stirring opus. The movie's misc
en scene and lighting is absolutely wonderful. The film is great to
look at as well as experience. There are some marvelous and more
importantly, creative landscape and interior shots and it's almost a
treat that the camera is frequently locked-down so we can admire these
moments.

In regards to the performances, they are solid. George Clooney proves
his worth as an actor yet again with his portrayal of this tormented,
cynical man of few words. Violante Placido is also very effective as
the girl. Thekla Reuton is icy and more than scenic in her performance
as the in-between person working with Clooney. Paolo Bonacelli is
compelling as the priest whom Clooney befriends, and Johan Leysen is
chilling in his moments as the mysterious individual who always answer
his phone with a gruff "Yeah?" "The American" is one of the best movies
of the year. However, I cannot guarantee that many people will agree
with my statement. First of all, because a lot going in will be misled
that this is a high-tensity action picture like "The Bourne Identity"
and when they find out it's not, they will leave the theater feeling
vastly empty. So that's why I am giving you warning. Don't go in with
that attitude. Go in with expectations for a fascinating,
nostalgia-stirring character study and be especially keen as you watch
the relationship between Clooney and Placindo transform. And believe
me: scenes that seem pointless at first will seem ideal when you look
back on it in hindsight.