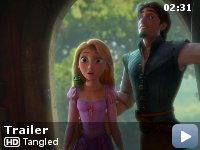 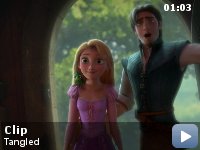 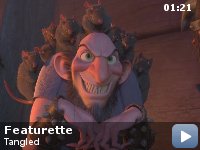 The magically long-haired Rapunzel has spent her entire life in a tower, but now that a runaway thief has stumbled upon her, she is about to discover the world for the first time, and who she really is.

Storyline
After receiving the healing powers from a magical flower, the baby Princess Rapunzel is kidnapped from the palace in the middle of the night by Mother Gothel. Mother Gothel knows that the flower's magical powers are now growing within the golden hair of Rapunzel, and to stay young, she must lock Rapunzel in her hidden tower. Rapunzel is now a teenager and her hair has grown to a length of 70-feet. The beautiful Rapunzel has been in the tower her entire life, and she is curious of the outside world. One day, the bandit Flynn Ryder scales the tower and is taken captive by Rapunzel. Rapunzel strikes a deal with the charming thief to act as her guide to travel to the place where the floating lights come from that she has seen every year on her birthday. Rapunzel is about to have the most exciting and magnificent journey of her life.

Captain of the Guard

Disney's previous animated feature
The Princess and the Frog, despite being popular with critics and audiences alike, was a box office disappointment. Disney felt that the film's princess theme discouraged young boys from seeing it. In an attempt to market the film to a broader audience, Disney changed the title of the film from Rapunzel to Tangled, and promoted it as a comedic adventure. An early trailer for the film focused less on Princess Rapunzel and more on Flynn Rider, the male lead character. It was originally believed that Disney's marketing campaign was a desperate attempt to search for a particular audience. However, Byron Howard and Nathan Greno, claimed that the title change was to emphasize that Flynn has as much of a role in the film as Rapunzel.

Incorrectly regarded as goofs:
Rapunzel's hair is just long enough to pull Mother Gothel up, but it is also long enough to lower Rapunzel to the ground, which would take twice as much hair. However, it is seen that Rapunzel loops her hair over hooks when pulling Gothel up, which would allow for half the hair to still be in the tower, with just enough lowered to serve Gothel.


I saw the finished movie at the screening before the wrap party. The
movie works on every level. The Characters, the animation, the story,
the score, the romance, and it's all very cute as well (in a way Disney
can apparently still pull off).

The one thing that I didn't get into was the songs (Except maybe the
"Mother Knows Best" reprise). They were a little weak melodically and
you won't be singing them for weeks like I do "Part of Your World"
every time I watch the "Little Mermaid." However, the songs are good
enough not to bring the movie down. There are so many touching scenes
in this movie and you will love all of the characters by the end and
have an amazing time in the process.

It is definitely worth seeing in the theater, as this is probably the
prettiest computer animated movie I've seen. I just can't wait to see
it in stereo!

(BTW, I'm a 30 year old male who grew up with Disney. And I feel like
I'm being objective when I say this movie works as a movie and not as a
movie exclusively for 10 year old girls.)

The Next Three Days
Middle Men