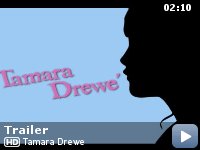 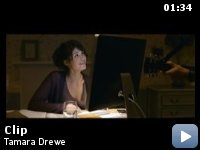 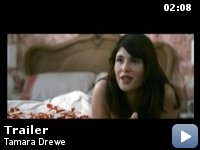 A young newspaper writer returns to her hometown in the English countryside, where her childhood home is being prepped for sale.

Storyline
Once the ugly duckling in the Dorset village of Ewedown, Tamara Drewe returns to sell her late mother's house, now a glamorous journalist with a life-changing nose job. She awakens feelings in sexy old flame, Andy, the decent odd job man at pretentious author Nicholas Hardiment's writers' school and in Nicholas himself, a serial philanderer who cheats on his loyal wife Beth. But Tamara has a new man in her life, Ben, an obnoxious rock drummer whose marriage proposal she accepts, to the dismay of local girl – and Ben's biggest fan – Jody. Jody's efforts to sabotage the engagement lead to Tamara, on the rebound and finding Andy in the arms of another, allowing Nicholas to have his wicked way with her, and also allowing it to be photographed and sent to a distraught Beth. Beth's secret admirer, American writer Glen, confronts Nicholas out in the fields, but Ben's dog Boss has got loose and has caused a local farmer's cattle to stampede towards them…

Andrea Arnold was offered the chance to direct the film. When she turned down the offer, Stephen Frears signed on.

Revealing mistakes:
When the writers at the writers' retreat are typing their books, their keystrokes obviously have nothing to do with the text that is going through their heads.


A very, very good movie, no doubt. Everything, in particular, each man,
woman, chicken, car, tear, cow and dog and meadow, each pop and tune is
on the right place. Excellent dialogs, sparkling soundtrack, gorgeous
photography, rich colors, fresh, witty and ebullient, perfectly
balanced black and … regular humor. The story is nicely knitted, a
lot of grey matter must have been consumed for the dialogs. Some lines
have got what it takes to become a "quote". I loved it! Found a few
British stereotypes? So what? Troubles to follow the quick replies in
the original English version? Cannot follow the subtitles while trying
to translate the cream of the jokes? So what? Watch it again!! I will!