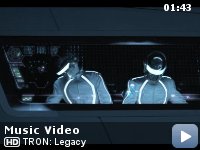 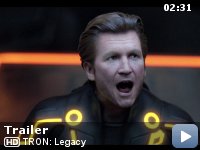 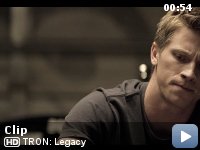 Storyline
Sam Flynn, the tech-savvy 27-year-old son of Kevin Flynn, looks into his father's disappearance and finds himself pulled into the same world of fierce programs and gladiatorial games where his father has been living for 20 years. Along with Kevin's loyal confidant, father and son embark on a life-and-death journey across a visually-stunning cyber universe that has become far more advanced and exceedingly dangerous.

Taglines:
The only way to win is to survive.

To play the computer program CLU, Jeff Bridges' face was "de-aged" with the same technology used on
The Curious Case of Benjamin Button to "age" Brad Pitt. Thus, in his role as Flynn, Bridges appears to be his actual age of 61, but as CLU (a program written back in the 1980s) he looks like he's in his 30s – programs don't age.

Revealing mistakes:
When Edward Dillinger Jr. logs into the console during the board meeting, if you look very carefully during the cut-scene from his typing to the console screen you will see "Ubuntu" as the actual console root.

Kevin Flynn:
The Grid. A digital frontier. I tried to picture clusters of information as they moved through the computer. What did they look like? Ships? motorcycles? Were the circuits like freeways? I kept dreaming of a world I thought I'd never see. And then, one day…

Kevin Flynn:
That's right, man. I got in.

The most visually appealing film of 2010


TRON: Legacy has been one of the most promoted films of the year. With
a monstrous budget (around $200 million) and reports saying that Disney
is worried that the film isn't tracking as well as they'd hoped, the
initial thought process from these rumors is that the TRON sequel will
open to a disappointing first place weekend much like the most recent
Chronicles of Narnia film. As of this writing, I haven't gotten around
to seeing the original film. I wanted to, but thanks to Disney it was
pretty much pulled from every retail store imaginable whether you
wanted to rent or purchase the film at least until next year. The urge
to see TRON: Legacy didn't really sink in until around the time the
third trailer was released. While the Daft Punk score has interested me
from the beginning, TRON: Legacy just seemed like another overrated
piece of eye candy that fan boys were getting excited about. The thing
about first impressions though is that they always have the opportunity
to be wrong.


The glorified TRON sequel is getting a lot of mixed reviews from most
movie critics. The problem seems to lie within the way the film is
written and its screenplay. To tell the truth, you don't see a movie
like this for a great story alone. The special effects are the main
attraction and boy, do they deliver. The way programs disintegrate when
they're disposed of, the light cycle battles, airborne chases, and the
many fight sequences in the film are just a small example of the
dazzling display of some of the most exceptional and impressive special
effects ever seen in a cinematic feature. As with most films that have
been presented in 3D lately, the 3D effect probably isn't necessary to
enjoy a film of this magnitude. It'll be just as entertaining if you
save yourself the extra $4 and see it in a conventional theater.

The writing didn't seem as bothersome as much as other reports say. It
certainly wasn't the best, but it seemed like enough to add just the
right amount of depth to TRON: Legacy and give it more of a background
than most films revolving around spectacular special effects. There
were a few lines that bothered me. The main one being when Alan first
visits Sam and Sam says something about his father probably either
being dead or chilling in Costa Rica…or both. Wait, what? It just
gives you this Weekend at Bernie's flashback with Bernie being replaced
with Kevin Flynn's limp carcass. Some of the lines Jeff Bridges
muttered just made him seem way too much like The Dude from The Big
Lebowski, which seems awesome but really has no place in the TRON
universe. Saying things like, "Check this out," or, "Radical, man,"
followed by that stoner laugh of his really didn't help matters much.
The weak points of the way the film is written are rectified with the
way the film never lets your attention out of its choke-hold. You'll be
drawn to the screen the entire film; that's practically a guarantee.
The right mindset for a film like this can make or break your opinion
of the film. If you don't have inflated expectations and don't expect
much more than impressive special effects, then you'll probably walk
away pleasantly surprised. I actually had a similar mindset during
Avatar, which seemed to also suffer/take advantage of groundbreaking
special effects being more consuming than the story and had a similar
result.

The cast is about as developed as can be expected. The real star of the
film is Garrett Hedlund, who does a pretty decent job of carrying the
film and being generally astonished that not only was his father alive
but the extraordinary world he always talked about actually existed.
Jeff Bridges' performance isn't nearly as strong as his portrayal of
Rooster Cogburn in True Grit, but he does have his moments. He seems to
shine during his reunion with Hedlund and his strongest scenes are with
Hedlund alone while being rather flat the rest of the time. Olivia
Wilde's Quorra is interesting, as well. There's an intriguing twist to
her character, but her fascination and curiosity revolving around the
world Sam is from is what gives her character heart. Michael Sheen did
seem a bit too over the top at times as Castor, but that may have been
the point. The biggest surprise was seeing Cillian Murphy cameo. Given
his strong outings in films like Sunshine, Peacock, and Inception, it
just left me wanting to see more of his character in future
installments assuming this film does well enough to warrant a sequel
(or sequels).

TRON: Legacy is certainly the special effects extravaganza it's been
made out to be all year. Its fantastic effects certify the sequel as
being the most visually appealing film of the year. While the writing
of the film isn't quite as polished as the special effects, there
certainly seems to be a good enough balance to keep the film afloat and
deliver an extremely entertaining way to kill two hours. As far as eye
candy goes, TRON: Legacy is an incredible and all around awesome
experience.