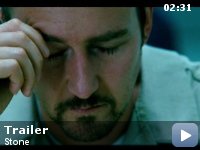 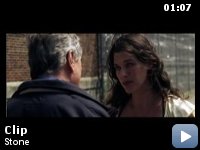 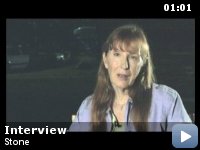 A convicted arsonist looks to manipulate a parole officer into a plan to secure his parole by placing his beautiful wife in the lawman's path.

Storyline
Parole officer Jack Mabry (Robert De Niro) has only a few weeks left before retirement and wishes to finish out the cases he's been assigned. One such case is that of Gerald "Stone" Creeson (Edward Norton), a convicted arsonist who is up for parole. Jack is initially reluctant to indulge Stone in the coarse banter he wishes to pursue and feels little sympathy for the prisoner's pleads for an early release. Seeing little hope in convincing Jack himself, Stone arranges for his wife Lucetta (Milla Jovovich) to seduce the officer, but motives and intentions steadily blur amidst the passions and buried secrets of the corrupted players in this deadly game of deception.

Taglines:
Some People Tell Lies. Others Live Them.

The prison scenes were filmed at the State Prison of Southern Michigan. At one time this was the world's largest walled prison. Since its closure the site has become a popular filming venue, having also served as the prison location for Tony Goldwyn's
Conviction.

Stone:
I'll tell you between you and me,
[my wife]

Jack Mabry:
Alien? What do you mean? Like an illegal?

Stone:
No, she ain't illegal man. She's whiter than you.


Filmmaking 101 has a rule; wait, Art 101 has a rule: Know your genre. A
drama can have comic relief, but that works only in the framework of
the genre that's been established. Comedies can have their dramatic,
emotional moments, but if they then turn into dramas, audiences are
confused and disappointed. If a screenwriter and director can't even
tell their story competently within the confines of the genre they
first set up, their movie will fail.


Yes, Stone is well acted. So what? Do you go to the movies to see good
acting class exercises? If so, check this movie out. Norton and De Niro
are entertaining, early on at least, and there's sharp dialog they have
to work with (how else could they do their jobs? Don't you love people
who praise the acting without acknowledging the script?)

But the story – the real reason most of us venture out to see a film –
in Stoner is a mess. The movie starts off essentially as a thriller.
The plot sets up a con working a con, with his sexy wife, on a prison
case officer. But after putting the movie is thriller mode the movie
then tries to be a drama about the meaning of life and presence of God.
The movie tries to turn its main plot with the wife into a subplot, and
then pretend that fun, salacious venture wasn't really what the movie
wanted to deal with. No, let's talk about the meaning of life.

Stone, then, is a disappointment. Even as a drama it fails: the story
dissipates into ambiguity with regard to the final action. POVs have
jumped around all throughout the movie but in not showing us the final
resolution between Stone and his wife, the whole fulcrum of the movie
is left blank. As for the transformation of Stone – something Norton
tries to act by occasionally calming his voice and widening his eyes –
it's unbelievable, not fully formed or demonstrated and, like the rest
of the movie, a pretentious attempt to take a fun dime-store novel's
story and make it profound.

Don't waste your time or money with this one. If you have to see it,
wait for video. The movie is shot in TV-like close-ups for the most
part and it will play just as well there.