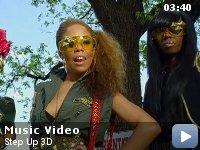 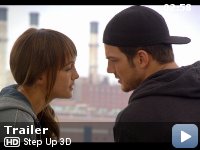 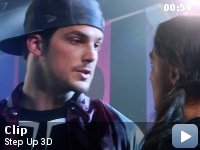 A tight-knit group of New York City street dancers,find themselves pitted against the world's best hip hop dancers in a high-stakes showdown.

Storyline
A tight-knit group of New York City street dancers, including Luke (Malambri) and Natalie (Vinson), team up with NYU freshman Moose (Sevani), and find themselves pitted against the world's best hip hop dancers in a high-stakes showdown that will change their lives forever.

Revealing mistakes:
During the first training montage where Luke and Natalie are doing the martial arts sequence, Luke's physique changes from being muscular to lean and skinny obvious stunt double.

Moose:
I was born to be the Ashley to your Mary-Kate.


"Step Up 3D" maybe the best 3D movie since "Avatar". You laugh. For one
thing "Step Up 3D" was filmed in 3D—no post production enhancement.
Seeing amazing street dancing is visually stunning in 3D. One
distinguishing sequence has Moose (Adam G. Sevani) splashing his moves
on the water flooded stage. In another electrifying sequence the dance
troop Pirates move in unison in LED lit costumes. One sees "Step Up 3D"
for the 3D—entirely.


No ground breaking storytelling here. Amy Anderson and Emily Meyer's
screenplay barely eclipses perfunctory. This is the coming of age story
of misunderstood young people overcoming the odds to compete in the
First Annual World Dance Jam. The dialogue is awful. We endure the
speaking interludes throughout the movie to get to the dancing, which
is spectacular. Director Jon Chu has a dramatic sense of line and chaos
with a provocative and flourishing visual style.

The dancing is spectacular. Jon Chu has assembled some of the best
street dancers in the world. The Santiago Twin (spirited Martin and
Facundo Lombard) just kill in the World Dance Jam. Chadd Smith as Vlad,
whose specialty is the Robot dance, is absolutely awesome—in 3D the
effect is mesmerizing. Sharni Vinson, who plays stunningly beautiful
and ripped nomad street dancer Natalie, is elevation and grace
combined. The capoeira practice she performs with Luke (cool and
handsome Rick Malambri) is high velocity precision. Chu is also a
student of the classic musical. He films an homage to "Singing in the
Rain" in a single take with Moose and his almost girlfriend Camile
(Alyson Stoner) as they duet down the street. Chu also provides such
visual texture and touch in the World Dance Jam itself mixing the Wushu
influenced Asian street dancers along with the breakers and the
poppers.

Even with the corny dialogue and lame story lines, the opening sequence
gets it right. Luke (Malambri) runs a shelter and dance studio for down
and out street dancers- his parents' legacy. Luke's passion is
film-making. As the movie opens we see Luke film interviews with his
dancers. This wonderfully captures that dancers are never more present
to life or have more joy than when they are dancing. Authentic passion
transcends the written words, and is inspired. In a roundabout way
"Step Up 3D" is at its best when it is in the moment in 3D, Otherwise,
we are left with that Moose is too stupid, albeit a brilliant
engineering student, to see that Camile is in love with him, and that
he really loves her. Mysterious Natalie may not be who she appears, and
that she and Luke are falling for each other. And does anyone really
take a train to Los Angeles from New York?

We kind of know the answers to these questions. So what there is to do
is enjoy the dancing.

TagsUSA
The Man from Nowhere
Scott Pilgrim vs. the World