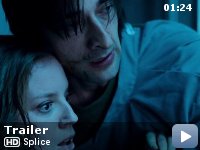 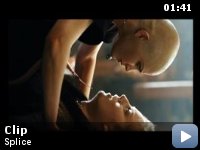 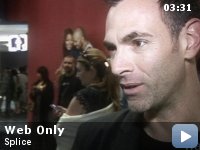 Genetic engineers Clive Nicoli and Elsa Kast hope to achieve fame by successfully splicing together the DNA of different animals to create new hybrid animals for medical use.

Storyline
Two young rebellious scientists are told by their employers to halt groundbreaking work that has seen them produce new creatures with medical benefits by splicing together multiple organisms' DNA. They decide to secretly continue their work, but this time splicing in human DNA.

Taglines:
She Is Not Supposed To Exist

The gestation cell that Clive and Elsa use to splice Dren has the acronym BETI placed conspicuously on the front of the machine. BETI stands for Biomechanical Extroutero Thermal Incubator. However, interestingly the word "BETI" means daughter in Urdu and Hindi, spoken in large parts of Pakistan and India.

Continuity:
When Elsa finds Clive and Dren in the barn, she stands in the wide-open door. In the next shot, from outside, Elsa throws the barn door open and runs out.


"Splice" is a step in the right direction for horror.

Every so often, I find myself pleasantly surprised by intentionally
misadvertised entertainment, and writer/director Vincenzo Natali's
genetic genre mash-up is the latest such example. From a marketing
standpoint, its scare-tactics are clearly the easy sell, despite their
comprising only a tiny percentage of its thematic intent. 'Hard sci-fi
parenting metaphor' is, after all, a much tougher pitch.


So expecting the tasteless creature feature from the trailer, "Splice"
impressed me in its pursuit of a more complex emotional response than
fear, and is successful in burrowing into your subconscious and picking
at your psyche. It's a thinking man's B picture, which plays with the
idea of morality on both a scientific and personal level. That it
remains intellectually stimulating, even when the surface-area film
dips into more traditionally hokey horror territory, is its greatest
strength.

What's so interesting about the story, in spite of what the trailer
suggests, is that the creature artificially spawned by genetic
engineers Clive and Elsa (Adrian Brody and Sarah Polley) is not an
antagonist for the vast majority of the film. "Splice" isn't about a
monster— It's about parenthood, and like with "Rosemary's Baby" or
"Eraserhead," taking the associated fears and filtering them through a
horror lens.

Besides the tail and the pronounced facial cleft, test-tube baby Dren
('Nerd' backwards, heh) is essentially human, and a big part of
"Splice's" inherent creepiness is that she's treated in turn as a
subject and a child—Warmly received, but caged and abandoned for
significant stretches of time. The realization of this character by
French actress Delphine Chanéac, is another of the film's triumphs. Her
general lack of dialogue sometimes forces the performance to rely a
little too heavily on pantomime, but that we can both feel for and fear
Dren simultaneously is a testament to the range of the actress.

Perhaps it's because "Splice" nails the big performances and the big
ideas, and because the gears turning behind the action are so
consistently fluid, that it's all the more apparent when it stumbles
over little things, like stilted motivation issues, and superfluous,
grating secondary characters. Clive's brother (Brandon McGibbon) and
boss (David Hewlett), for example, are flat placeholder roles that
transparently progress the plot instead of enriching it. The triangular
relationship between Clive, Elsa, and Dren, and its weird morphing
emotional permutations, is what "Splice" is at its core. It is a film
with very few characters, but every moment not spent on that central
dynamic feels like time wasted.

Still, that minor gripe is forgivable because "Splice" has two hugely
important and rare qualities for modern horror—Original thought and
fearless storytelling. The undercurrent of sexuality in the film, the
internal dialogue on gender roles, is apparently one of the reasons no
studio wanted to touch the script last year, but Natali's film is a cut
above the rest precisely because it isn't afraid to make an audience
uncomfortable. And it gets uncomfortable.

"Splice" gets a lot of credit from me in the abstract. The concrete
film doesn't quite live up to the incredible promise of the ideas
behind it, but the very presence of those ideas is reaffirming to a
degree, and that "Splice" received a wide domestic release is more
encouraging still. Granted, it went on to perform below expectations at
the box office, but was positioned against more breezy summer fare like
"Shrek" and "Get Him to the Greek."

The other possibility, and this suggests more consumer confidence than
an ad man may be inclined to grant, is that "Splice's" scare-tactics
aren't the easy sell. Maybe, like me, potential moviegoers just saw a
trailer for another crappy horror movie instead of the interesting,
offbeat experiment it is.

It's Warner Brother's loss, and the audience's.