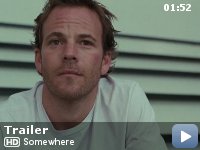 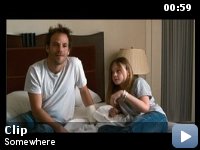 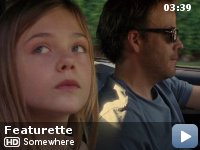 A hard-living Hollywood actor re-examines his life after his 11-year-old daughter surprises him with a visit.

Storyline
Hollywood actor Johnny Marco, nested in his luxury hotel of choice, is a stimulated man. Drinking, parties and women keep a creeping boredom under wraps in between jobs. He is the occasional father of a bright girl, Cleo, who may be spoiled but doesn't act it. When Cleo's mother drops her off and leaves town, Johnny brings her along for the ride, but can he fit an 11-year-old girl into his privileged lifestyle?

Stephen Dorff and Elle Fanning spent a lot of time together prior to the shoot in order to build the father-daughter relationship their characters have. For example, Dorff sometimes picked Fanning up after school.

Continuity:
Cleo toggles between having and not having braces from scene to scene. This is most noticeable in scenes in the living room with Sammy and scenes in Johnny's car.


A 30something year old actor spends his days (and nights) driving his
Ferrari as fast as it can go, getting private shows from women,getting
massages and participating in events which are part of his career. When
at a press conference a journalist asks him "Who's Johnny Marko" he is
unable to respond. Johnny is someone (or is he?) but he doesn't really
know who. The relationships he has with people are far from personal.

From what we see at the beginning of the movie we would probably think
Johnny is the usual single good looking but empty inside actor and that
he pretty much has been all his life. But when his daughter shows up
the picture is different: a failed marriage behind him… could this
have made him what he is? maybe. As he welcomes Cleo back in his life
she somehow seems to fill the emptiness of the environment around him.
Nothing particularly overwhelming, just the little things that make the
difference.

Does this movie display emotion in an explicit and clearly visible way?
No. The dialog between characters is not what makes the difference.
It's the feelings that make us think we're going somewhere or instead
that we are so disconnected we can't care less where we are going. The
feelings you can't really put into words (as properly emphasized in
"Lost in Translation").

Just like the latter, "Somewhere" shows life as it is, no astonishing
happenings, not many life changing experiences and maybe this is what
will make a lot of people walk out of the theater unsatisfied or bored.
We usually go to the cinema to evade from reality, see relationships
develop clearly as they drastically change the lives of those involved
in them. But this is not the case: just like in our lives things slowly
develop and maybe over time change the way we see the world or feel the
world. Maybe as the film suggests at one point, we need to slow down
and take a look at where we are going instead of just passing through.

"Somewhere" is a particular movie from a particular director/writer. I
can't go ahead and say watch this movie, you will love it, because it
isn't for everyone but this is not a good enough reason to not give it
a try altogether.

TagsUSA
The American
Of Gods and Men