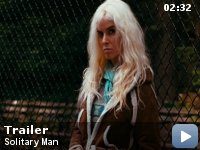 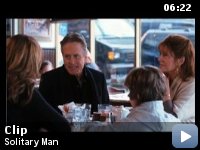 A car magnate watches his personal and professional life hit the skids because of his business and romantic indiscretions.

Storyline
Ben Kalman is aging: he has heart problems, his marriage is over, he's lost a fortune after being caught cutting corners in his East Coast car business, and he's sleeping with as many women as possible – the younger the better. He's chosen his current girlfriend, Jordan, because her father can help him get a new auto dealership; she's asked him to escort her daughter, Allyson, 18, on a visit to a Boston college campus. He behaves badly, and there are consequences to his love life, his finances, and his relationship with his daughter and grandson. Is there anywhere he can turn?

Taglines:
Ben loves his family almost as much as he loves himself

This film shares its title with a Neil Diamond song sung by Johnny Cash at the beginning of the film. Johnny Cash was known as "the man in black" due to his propensity for wearing all black. Michael Douglas' character spends most of the film wearing black clothing and only occasionally wears anything except black.

Jimmy Merino:
When my father gave me this place years ago, I used to dream about these girls. Every night, dreams, all kinds of dreams about 'em. But then I'd see them coming back after graduation. They'd come to homecomings, ballgames. They'd sit at the same tables, eat the same food. And I'd look at them and I noticed, they don't stay like this. None of 'em. They put on years and pounds and wrinkles. And I got one like that at home. So. And we can talk to each other. I know her and I'll always know her.

A man out of options, who refuses to notice

This Hollywood movie might have worked better as a rough-hewn indie
picture with more particularized locations and more unexpected faces,
but it has two big things to recommend it: the writing, and a wonderful
performance by Michael Douglas as the titular loner, a fallen used car
magnate, a seducer of young women and a man near sixty who's run out of
options. Douglas wears this charming sleazebag's skin with breathtaking
ease. The settings don't really matter too much (they're pretty
generic), and the excellent cast, which includes Susan Sarandon, Sarah
Louise Parker, Danny De Vito, and Jesse Eisenberg, is a little too
familiar. But none of that matters because Douglas is so good. The
noirish aspects of the story creep up on you very gradually, and you go
from not caring about the protagonist to caring just when you know you
should have long given up on him. This is the writing and Douglas's
performance working together to create a man who is reprehensible in
interesting and perhaps universal ways.

Ben Kalmen is a wise guy who needs to learn a lesson. You would think
he had already learned a big one. He was a car dealer in the Tri-State
area so successful he was once on the cover of Forbes Magazine. Then he
ran a scam against the car companies, taking profits from cars he
hadn't sold. He was arrested, he squandered a fortune defending
himself, he paid a huge fine and all but went to jail. He is disgraced.
All of his powerful friends have abandoned him. He is also broke and
divorced. Six years ago as we see in a preview sequence, his doctor
found heart irregularities that might be dangerous and wanted to have
tests run. Ben ran from that instead — to bars where he began picking
up and bedding young women in an effort to cheat time and mother
nature. This is a game that has worn thin, but he isn't prepared to
give it up.

When the action begins he's pushed by his very wealthy girlfriend
Jordan (Parker) to take her daughter Allyson (Imogen Poots) up to his
alma mater for an admissions interview. He has given a lot of money to
the school in the past and still has influence with the dean. He
doesn't want to go, but he goes. Allyson doesn't want him to come, but
he comes. There's mention of her having had a drinking problem. She
puts on a great pose of sophistication and independence. And then over
the weekend he gets her drunk and seduces her. He also makes friends
with a sophomore, Daniel Cheston, whom he calls Cheston (Eisenberg).
With both young people Ben indulges a penchant for playing the
worldly-wise sex adviser. He tells Allyson how to get her young men to
satisfy her sexually (that's how he begins his seduction) and he tells
Cheston how to get a girl. Later he betrays Cheston's trust.

Once Ben sleeps with Alllyson on that trip, bad things happen, very bad
things. His attempt to overcome doubts in high places and start a new
car dealership is gradually shot down. He can't even get a job as a car
salesman. He is behind in his rent; he borrows money from his serious
daughter Susan (Jenna Fischer). He runs out of money and goes to his
old college friend Jimmy (De Vito) for help. The wrath of his
girlfriend Jordan turns out to be very dangerous.

Douglas' role as Ben Kalman touches on aspects of his Gordon Gecko of
Wall Street and Grady Tripp of Wonder Boys, which is to say he is well
cast, not that this is a repetition of those roles or performances. Ben
is as lacking in a sense of human values as Gecko, and his life is in
as much disarray as Tripp's. Some find Ben much more shocking than
either. So much the better. Douglas takes on this role fearlessly and
it leads him along familiar trajectories into a new place. Ben is a
human being. He is a man more adept at the material than the moral
who's dealing with his fears the best way he can. He is short on wisdom
but not on bravery. His grandson adores him. Like the dad in the indie
surprise flick Daddy Longlegs, he is the dangerous, unreliable adult
who is magical and fun. He is the man young adults may need along the
way for inspiration and then must discard when they realize some
essential parts of the picture, the consistent set of values, was
lacking.

Douglas' thrusting intonations here become the embodiment of the (once)
successful car salesman. Ben is selling a materialist and sensualist's
program for defying time. Perhaps not enough time goes in the film to
establishing Ben's former good side. It's a little hard to understand
how his ex-wife Nancy (Sarandon) can remain so understanding, not to
mention his daughter Susan's rallying when she has once given up on
him. De Vito's still-loyal old friend is an idealized and simplistic
figure. And yes, it would be better if Douglas, too, were not so
familiar to us. But the movie still succeeds in concocting a man and a
situation that have much that are fresh about them. Ben is a
wonderfully complex creation, charismatic and charming and sexy and yet
very clearly also a jerk. And in playing him, Michael Douglas shows
himself once again to be a very good and very brave actor, for more so
than people tend to realize. Koppelman and Leviean have written for
Steven Soderbergh, who co-produced; Leviean was the writer here, and
his collaborating on the directing seems to have worked well for the
coherence of this well-made film.