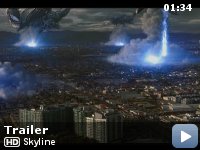 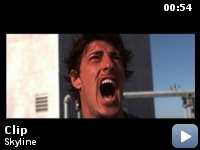 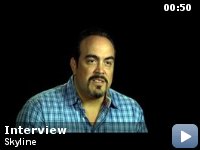 Jarrod, an artist, and his girlfriend Elaine have flown to Los Angeles for Jarrod's best friend Terry's birthday party.

Storyline
Jarrod and his pregnant girlfriend Elaine travel to Los Angeles to meet his old friend and successful entrepreneur Terry, and his wife Candice. Terry gives a party in his apartment for Jarrod and offers a job position to him in LA. Terry's assistant and lover Denise (Crystal Reed) and his friend Ray (Neil Hopkins) sleep on the couch in the living room, but in the dawn of the next morning, the group is awakened by mysterious beams of blue light. Ray stares at the light and is taken by the mysterious force. The group of friends try to escape from the alien invaders.

Taglines:
Soon, our first encounter will become our last stand.

There are over 800 VFX shots in the film, more than most franchise tent poles.

Continuity:
Right after the aliens land, Terry walks toward the window and his Superman tattoo is visible on his right upper arm. However, in a previous scene, when he is walking to the swimming pool bar, the tattoo does not exist.

Elaine:
[a bright blue light shines through the blinds and the bed shakes]
Oh, how's it morning already?

An intelligent Scifi that doesn't cater to the crowd


After reading so many negative reviews I was actually considering not
going to watch it….

I was expecting the worst I even took my android phone in case it was
really bad and I could of played a couple of games.

This film doesn't follow the Hollywood method it doesn't have a normal
ending, characters are not printed on politically correct paper.

I found the reactions of the people involved to be realistic, normal
people with small minds and grasping to small problems in a situation
they have no control over..

A humankind shown to be 99.999% normal petty and none heroic.

We watch so many films that follow a formula that show man out to be
this amazing being who always survives always wins we are so use to
being saved and its not really true is it ? We don't have a ace pilot
or elitist hacker we don't have a superhero to fix it all, we be in
trouble if something more advanced than us comes to play.

To me this makes it an awesome film and strangely I found the rest of
the people in the cinema of the same mind as soon as the film finished
people I didn't know started discussing it as a bit of fresh air.

If you like your films like independence day or Armageddon or any film
where humankind are groomed and praised where a prayer to the gods or a
speech by the president saves the day then you probably won't like this
movie.

I look forward to seeing skyline 2

TagsLAUSA
To Save a Life
Brotherhood