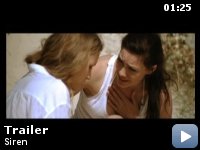 A group of friends escaping the city for a weekend away have a simple plan, to tour the coast for a relaxing weekend…

Storyline
A group of friends escaping the city for a weekend away have a simple plan, to tour the coast for a relaxing weekend. Things hit a snag when one of the friends spots a seductive, sultry young woman waving for help off the shore of one of many secluded islands along the coast. Reaching out to rescue her turns deadly and they risk everything to get off the island alive.

Terrible from start to finish.


Samuel L. Jackson once said in the film Changing Lanes to Ben
Affleck…."I Want My Time Back!!" That's how I feel after watching
this mess of a horrid film.

Siren is a "horror" film in which three friends take a boat trip to get
away from the city. They spot a man on an island and rescue him, he
soon dies on their boat. The motor on their boat has been fried and
they decide to stay on the island over night. While on the island they
run into a woman, who seems frightened, disoriented and can't seemed to
remember things. She is beautiful and her beauty grabs the attention of
the three characters, even the female. She turns out to be a siren, of
Greek mythology. A beautiful woman who would lure men to the island
through song. Death was brought upon them.

Argh, this film has an interesting cover design. A woman holding a
knife in a bikini. There were two other women on each side of her, also
in bikinis. The back cover of the DVD has yet another woman in a
bikini. The tagline read an exotic tale of lust and revenge. Sex and
horror, two great elements that go together. With a little bit a Greek
mythology sprinkled in, I expected this film to be at the very least
tolerable. Boy, was I ever wrong.

First, if the poster excites you, don't. This is a classic case of
never judge a book by it's cover. Siren will try to lure you in with
the promise of sex, blood and horror. The film never has a moment of
these things. The film starts off with two characters pretending to be
strangers, to spice up their relationship apparently. It fails because
the woman has visions of some blonde person, whom we later find out to
be the siren. They have sex, successfully on the boat, never exciting
during the scene though. The siren has many scenes where she kisses the
woman, I have no idea why. Maybe it was a cheap attempt at luring in
young boys?

The back of the cover on the DVD is also wrong with the description of
the film. It says they spot a seductive sultry woman on an island, this
is incorrect. They spot some bearded man ramblings on in gibberish. It
isn't till they bury him on the island do they see the woman, whom is
neither seductive or sultry. We are treated to a bunch of scenes where
the characters see things that aren't really there. The question of
what is real and what isn't is raised, but you'll never be interested
enough to care.

I'm expected to believe that the one character was in love with the
other, except that he's upset about a 'hot friend' not making the trip.
He also tries to have a three way with this new woman, just more fuel
to the aggravating fire. Please, even a fifth grader can come up with
better characterization than that. The third character, Marco, was
pointless. Just another person to fill up the 80 minutes running time.
He likes the woman that is dating the guy, but it never leads anywhere.

How do people die? The siren sings and they bleed from their ears. That
is it. Excitement level is at an all time low here. Don't even get me
started on the obvious and completely inane ending. This is not a
horror film, I would call it suspense if anything…it even fails at
that though.