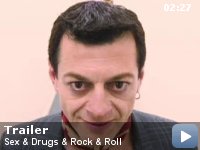 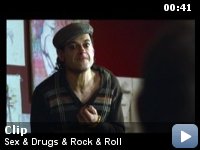 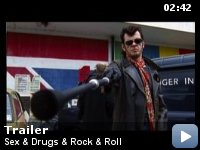 A biography of Ian Dury who was stricken with polio at a young age and defied expectations by becoming one of the founder of the punk-rock scene in Britain in the 1970s.

Storyline
A biography of Ian Dury who was stricken with polio at a young age and defied expectations by becoming one of the founder of the punk-rock scene in Britain in the 1970s.

Factual errors:
When Baxter discards the Stretch Hulk birthday present from his Dad in the bin, you can clearly see that it is a standard action figure, and not a 'stretch' toy.

Like an uncommonly honest MP, this reviewer must declare a particular
interest: Ian Dury was born on 12 May, a Tuesday. Me too: Tuesday, 12
May. (Albeit 28 years later.) Andy Serkis, who plays him here, is
half-Iraqi, like me. And while Dury studied under Peter Blake at the
Royal College Of Art, I, er, once worked in the Royal College Of Art
shop. Polio helped make Dury the man he was, but cancer ultimately made
him bigger than life. There's an allotment set aside in every heart for
one of England's national treasures.

And not just England's: strange as it is to picture a generation of
nascent Brooklyn and West Coast rappers wigging out to Black Sabbath or
German art minimalists during the 1970s, how stranger still that A
Tribe Called Quest should sample Dury for 'Can I Kick It'? Or is it?
The Blockheads sound is a steaming gumbo of (hugely influential)
influences: a dollop of pub rock, a sprinkling of free jazz, a dash of
lover's rock, a generous infusion of English music hall, all topped off
with Chas Jankel and Co's boiling blue funk. What's not to like about
that lot?

It shouldn't really work, but it does – just like the frontman himself,
as complicated as any artist worth their sodium chloride. Kitted-out
like he'd ram-raided a jumble sale run by a collective of art students,
Psychobillies and NHS outpatients, Dury's arty 'Do It Yourself'
attitude anticipated British Punk Rock (which studied, literally, at
his feet) by several years. Not that he aligned himself with any such
movement. There's a lovely clip on YouTube from 1979, in which he
invites "Mickey Jones from The Clash" up on stage to play 'Sweet Gene
Vincent with him.' "Now listen," he warns the Clash man, "we've got
*four* chords in this song, Michael…" Jones' gloriously chagrined
grin is worth the admission alone.

So, are we to mourn this real mensch's decline with some Thunderbird
wine and a black handkerchief then? Or instead, party like it's 1977?
Sex & Drugs & Rock & Roll is a truly life-affirming and brilliantly
unsentimental celebration of the Mockney and his music. Serkis was born
to play this role, allowing him to make the most of his celebrated
physicality and vocal dexterity. (So convincing, in fact, the real
Blockheads have suggested Serkis subsequently go on the road with
them.)

Whether barrelling, quip-me-quick, through a set – a defiant Long John
Silver with a singing range that starts out like a caress from a brillo
pad soaked in brandy – and ends up like a charging Cockney Elephant;
making a literal breakfast of a recording studio by pouring milk and
eggs into the mixing desk; or bellowing the song that gives the film
its title – and really, what other title could there possibly be? –
he's the spit, snot and fag ash of the unofficial Poet Laureate who
gave us the likes of 'Billericay Dickie', 'Plaistow Patricia', and of
course, 'Spasticus Autisticus': it's one of the ironies of his career
that the showman's terrifically self-assertive contribution to 1982's
United Nations Year of The Disabled was subsequently banned. "I'm not
Tiny Tim, I'm Ian Dury!" he roars at "Graham from the Spastics
Society". "People like me don't want sympathy – we want respect!"

Respect is what the filmmakers bring, by the bucket-and-spade, closely
aided by Dury's daughter Jemima and son Baxter – now a musician in his
own right, who appeared with his dad on the cover of 'New Boots And
Panties', looking for all the world like Dodger to Ian's Bill Sikes.
And this is really a film about fathers and sons. Bill Milner plays
Baxter, a rock star's son going predictably, if spectacularly, off the
rails, and Ray Winstone is Ian's adored dad Bill. Between these
generational polarities, Ian struggles to reconcile familial
responsibilities (and two lovers) with his growing fame, while trying
to do right by his father's memory.

"Being an underdog with nothing to lose is a good place to start in
life," Bill tells him, teaching him to stand on his own two feet, if
only with the aid of callipers. Years later, when too busy to watch
over Baxter's swimming session, Ian's glibly departing words are "Keep
your head up, keep kicking, try not to drown." It was in a swimming
pool, of course, where Ian contracted polio. As we say, complicated.
Dury puts it more bluntly: "To be a geezer like me, you've got to be a
bit of a selfish loony; occasionally one's behaviour makes one ashamed
of oneself."

All of which probably suggests scenes of anarchic mayhem followed by
periods of reflection and redemption. Well, bollo to that, 'cos this
ain't your average rock star biopic either: no insultingly reductive
peaks and troughs. As Dury states towards the end of the film, "The
only thing I've missed is a few buses." Instead, scenes are introduced,
non-linear-fashion, via the appropriate conceit of a stage performance:
backdrops spring to life, as real-life morphs into pop videos. There's
sterling support too from Naomie Harris as Ian's girlfriend Denise
Roudette, and Olivia Williams as his extremely understanding first wife
Betty. Actually, being 'extremely understanding' would appear to be the
default setting for anybody within this force of nature's sphere.

Ian, you feel, would have really enjoyed this film, as playful and
rough around the gills as he was, with a gleefully inventive aesthetic.
He would have also liked the fact its producer set up a disability
training scheme for young, disabled, aspiring actors and filmmakers
during the production; there's a scene toward the end in which Ian
visits a group of disabled kids, and addresses them with exactly the
same beautiful frankness he'd reserve for anybody. The final 10 minutes
treats us to a superbly recreated Blockheads gig, for which they should
clear the cinemas of seats and let the people mosh till they drop. Oi
Oi!