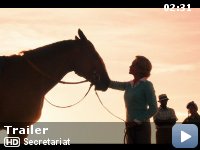 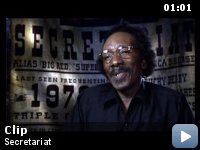 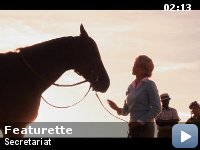 Penny Chenery Tweedy and colleagues guide her long-shot but precocious stallion to set, in 1973, the unbeaten record for winning the Triple Crown.

Storyline
Housewife and mother Penny Chenery agrees to take over her ailing father's Virginia-based Meadow Stables, despite her lack of horse-racing knowledge. Against all odds, Chenery — with the help of veteran trainer Lucien Laurin — manages to navigate the male-dominated business, ultimately fostering the first Triple Crown winner in twenty-five years.

Penny Chenery:
[Chenery speaking to Secretariat the evening before the Belmont Stakes]
I've run my race. You run yours.

Good, but not GREAT!


My grandmother was a parent during the '50's and liked everything neat
and clean and in its place. Heaven forbid if things get too out of
hand; too "real". I have waited my entire life for Hollywood to tell
Secretariat's story and after watching Disney's Secretariat my heart
remains unsatisfied. It was a good, "feel good" movie, but "good" is
the keyword. I felt like Grandma edited this movie. Again, it is a good
movie with some interjections of great cinematography, yet Secretariat
was a GREAT horse and deserved a GREAT movie. This was an Oscar winning
story, with an Oscar winning cast, but the script was emotionally
impotent. There were no risks and risk is what horse racing is all
about. The movie is so safe and there wasn't anything safe about the
facts that surround this horse and his rise to be the greatest race
horse that ever lived.


Still today, when I watch Secretariat run on YouTube, I cry!!! I'm not
sure why, but the tears flow from the depths of my being. Rationally, I
try to tell myself that he is just a horse, but something overcomes me
every time, no matter how many times I watch him run. That overwhelming
surge of emotion is what this story deserved. If you've ever been in
the presence of a great horse, you will know what I am talking about.
They are strong and confident. You can feel their aura. There is a low
rolling thunder of excitement when you are near them. Talk to the
people who were there. Read the first hand accounts of their emotional
state when they saw this horse run. He was mesmerizing, captivating,
unexplainably breathtaking. The audience deserved to feel the thunder
roll through them in every scene.

I expected so much more from director Randall Wallace. The power and
emotion of Braveheart, We Were Soldiers, Pearl Harbor, The Man in the
Iron Mask, is what Secretariat deserves. Where was that? I'm not sure
what research he did for this movie and how much his hands were tied by
the real life characters or the studio, but the main character became
the background and what was in the forefront was a "sugar coated"
conflict of a woman with a driving passion and the place society and
her family was trying to lock her into; however, even her passion
didn't spill out onto the audience as it should have. I felt like the
accomplishments of Penny Chenery and Secretariat have been shrunk down
and placed into a nice, neat little box fit for a good little housewife
and her sweet little horse. I felt as if I was the one being squelched,
because I wanted so badly for everyone to share the emotion I feel at
the sheer audaciousness when this horse ran. To accomplish what they
accomplished, he and his owner had to be completely audacious to rise
above the negativity and overwhelming odds surrounding them.

Diane Lane is one of my favorite actresses; however, her role left me
doubting the character. For example, when a woman talks to her horse,
she does more than look into his eye for a few seconds and say, "Well
OK then". When a woman truly needs to know something from her horse she
breathes him in, they breathe each other in, as their souls entwine and
one knows the other. You will see it on his face and you will see it on
her face, without human words being spoken. This is a rare and special
event, but it happens, and it could have carried this movie. If you
have seen Diane Lane in "Unfaithful" you will realize this is an
actress that could translate this kind of communication and emotion to
the screen.

The audience should have been allowed to feel the emotional range that
surrounds all involved in preparing a horse for the greatest races any
thoroughbred will ever run. Just watch horse racing on television and
you will see real raw emotion that these people explode with at the end
of the race. So much was on the line for everyone involved and yet
throughout the movie everyone handled the stress with subdued emotion,
never getting too far off the scale. Just when you thought someone was
going to show some real feelings, they apologized for it. Real life is
just as ugly as it is beautiful. Without the dark of night, the
brightest stars would never beam their intense beauty upon us. Every
masterpiece must have its extreme contrasts to fulfill the emotional
needs of its audience.

I'm not blaming anyone. I am sure everyone involved did their best. I
am simply sharing with the reader my disappointment in what I thought
would be a thrilling tribute to a horse so deserving.

Ron Turcotte said the film captured the story "pretty well". I ask you,
is "pretty well" good enough for the greatest race horse who ever ran
on the track? Secretariat's heart was two and a half times the size of
a normal horse's heart; I feel the portrayal of his story should have
been two and a half times the size of any regular movie. He gave us
everything he had when he ran the Belmont; thirty-one lengths ahead of
Sham who was an amazing, record breaking horse in his own right. Don't
we owe it to him, to give him everything we've got, to see that
generations to come understand the events that transpired to make him
who he is? Have we as a culture become so jaded that there can be no
magic in the truth? Can the epic only be found in fiction? I don't
believe it. I believe that purity of a moment of perfection forever
locked in time is where magic can be found and that magic is why it
brings inspiration and tears to the eyes of the soul who seeks it.