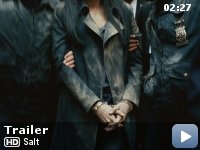 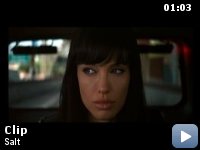 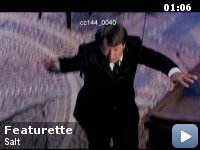 A CIA agent goes on the run after a defector accuses her of being a Russian spy.

Storyline
Evelyn Salt is a CIA agent and highly respected by all, including her boss, Ted Winter. Out of the blue, a Russian spy walks into their offices and offers a vital piece of information: the President of Russia will be assassinated during his forthcoming visit to New York City to attend the funeral of the recently deceased U.S. Vice President. The name of the assassin: Evelyn Salt. Concerned about the safety of her husband, who she cannot contact, she goes on the run. Winter refuses to accept that she is a mole or a double agent but her actions begin to raise doubts. Just who is Evelyn Salt and what is she planning?

Taglines:
Salt Will Not Be Stopped

It's never stated explicitly beyond "present day," but the main action in this film takes place "in the near future" after the movie's release (summer of 2010). Evidence: In a scene shortly before the vice president's funeral, a long shot of a TV newscast shows his date of death as 2011.

Errors in geography:
Before the action moves to NY, while still in Washington, DC, there is a scene which supposedly takes place in Washington, but is recognizable to me as Riverside Dr. near W. 156th St. in NY. Although in the distance, it can be seen that a wrapper has been placed over a NYC street sign, reading something like "C Street" or "G Street" to make it appear as Washington.

Interrogation Tech:
You are a spy!

Interrogation Tech:
You are here to sabotage our nuclear ambitions. Yes?


Many reviewers here have stated that this movie isn't realistic because
'Salt doesn't get bruised enough' or 'no one her size could…' Have
these people ever been to an action movie before? NO ACTION MOVIE IS
REALISTIC. They are all written to be over-the-top because that's what
makes them entertaining. We suspend disbelief to enter the world of the
action-hero (or heroine) and we go along for the thrilling ride that is
sometimes so over-the-top it's ridiculous! But that's what makes it
fun. If action movies were realistic, they would be slow and boring.
This movie does not cross the line anymore than any other action movie.


Salt delivers exactly what is promised — a solid 100 minutes of
action. It keeps you watching, it keeps you guessing (even when it
turns out you were right in some cases), and it entertains from start
to finish. If you like the action movie genre, chances are you will
enjoy this movie.

As for the reviewers who criticized the way Russians are portrayed, the
action genre plays to comic book-like caricatures. The villains are no
more realistic than the heroine! This isn't a documentary!

If you like action movies, give Salt a go. Angelina won't disappoint.