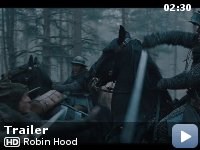 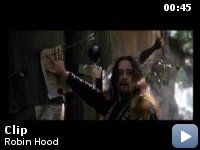 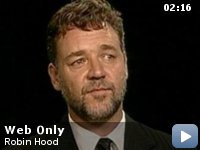 In 13th century England, Robin and his band of marauders confront corruption in a local village and lead an uprising against the crown that will forever alter the balance of world power.

Storyline
Birth of a legend. Following King Richard's death in France, archer Robin Longstride, along with Will Scarlett, Alan-a-Dale and Little John, returns to England. They encounter the dying Robert of Locksley, whose party was ambushed by treacherous Godfrey, who hopes to facilitate a French invasion of England. Robin promises the dying knight he will return his sword to his father Walter in Nottingham. Here Walter encourages him to impersonate the dead man to prevent his land being confiscated by the crown, and he finds himself with Marian, a ready-made wife. Hoping to stir baronial opposition to weak King John and allow an easy French take-over, Godfrey worms his way into the king's service as Earl Marshal of England and brutally invades towns under the pretext of collecting Royal taxes. Can Robin navigate the politics of barons, royals, traitors, and the French?

Taglines:
The untold story behind the legend.

In response to criticisms that he was too old to play Robin Hood, Russell Crowe crash dieted before filming began.

Anachronisms:
When reading the note carried by the pigeon, Marshal is shown using a huge magnifying glass, or lens. Although magnifying glasses have been described in England in the 13th century, they wouldn't have been of that size and quality.

I had very high expectations and who wouldn't? Ridley Scott directing a
great adventure with a very solid cast and a high budget.

The movie didn't really start the way I thought it would. The pace was
quite slow but very interesting, and I was gripped. The interaction
between Robin and his fellow soldiers was quite believable and
entertaining, and the story about the English crown succession was also
nicely done.

The entire chapter about Nottingham and its citizens is also at a nice
and slow pace, but its never dull. Von sydow is a pleasure to see as
usual, and both Crowe and Cate Blanchett delivers. You just sit and
smile, when things suddenly goes very very wrong…

It starts when Walter Loxley explains Robins past to him. The scene is
rushed and it seems a bit far-fetched. Also the following scene when
robin goes to the meeting of the barons. Ridley must at this time
peeked at his watch and noticed that he let most of the movie pass
without telling much, and start to massacre the script.

The Nottingham action scene is where it's starting to go seriously
wrong. You can't really get to understand how Robin suddenly is in
command of an army, and speaking to lords as their equal. Especially
when they call him by his common name in a scene later. The pace is
really off here too… Action scene-Action scene-Short grief scene-
Love scene- And on horseback against the French again in a 5min gap.
Set in contrast to the feelgood mode you were in this is a very rude
awakening.

After this you are handed a fighting scene that is absurd in every way.
The landing craft is from WW2 (what possible use does the landing
bridge have on these boats?). The battle is a slaughter, the French
never stand a chance(not very interesting).

When suddenly Marion appears on the beach with the local teenage
runaways on ponies I just shake my head… why?! It's just stupid?!
Also they seem to be trained by ninjas and easily takes on trained
French soldiers.

There is an ending after, but its thrown together in five minutes.

This movie had a lot of potential, but it's thrown away on hasted parts
and plain stupid scenes.