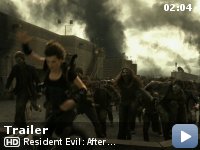 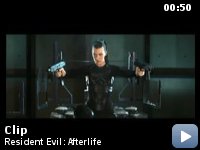 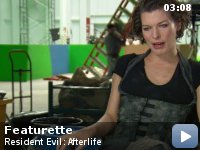 While still out to destroy the evil Umbrella Corporation, Alice joins a group of survivors who want to relocate to the mysterious but supposedly unharmed safe haven known only as Arcadia.

Storyline
In a world ravaged by a virus infection, turning its victims into the Undead, Alice (Jovovich), continues on her journey to find survivors and lead them to safety. Her deadly battle with the Umbrella Corporation reaches new heights, but Alice gets some unexpected help from an old friend. A new lead that promises a safe haven from the Undead takes them to Los Angeles, but when they arrive the city is overrun by thousands of Undead – and Alice and her comrades are about to step into a deadly trap.

Taglines:
She's back…And she's bringing a few of her friends.

This is the first live-action movie based on a video game to be in 3-D.

Anachronisms:
The inside of the Arcadia does quite obviously not match the exterior of the vessel in neither size nor shape.

Alice:
[narrating]
My name is Alice. I worked for the Umbrella Corporation in a secret laboratory developing experimental viral weaponry. There was an incident. A virus escaped. Everybody died. Trouble was, they didn't stay dead. This was the start of an apocalypse that would sweep the entire world. The men responsible for this disaster took refuge underground and continued to experiment with the deadly T-Virus. They felt secure in their high-tech fortress. But they were wrong.

Am I not getting something?


In a series that deals with viral mutations, it's pretty fitting that
the fourth Resident Evil, a film that found its roots in the sort of
humble zombie/ mad scientist territory, is practically mutated beyond
recognition. And when is mutation ever really a good thing? After a
devastating zombie plague hits humanity, rogue survivor/ superhuman
Alice (Milla Jovovich) roams the globe seeking those responsible: the
evil Umbrella corporation. This time, the search takes her to LA, where
she finds other survivors holed up in a prison, and a mysterious
safe-haven called Arcadia.


Told like a story translated into French, Japanese, back to English,
and finally into GGAAAAKEEERFLLLAAARGH, Afterlife is a bloody patchwork
of action movie clichés, clunky dialog, and more slow motion than you
can shake a clock at. There's also a villain so villainous he wears
dark glasses inside. INSIDE.

The whole thing plays out like a video recording of a theme park ride,
and if we were to defend Afterlife at all, it would be that its 3D
appeal does make it sort of like a ride, so much so that watching it in
any other dimension is a weirdly unfocused experience that falls (get
ready for it) flat. Slow-mo rubble sails unimpressively across the
screen. Slow-mo bullets sort of come toward you. Oh, and did we mention
the slow mo? But all these hilarious jokes aside, it's a shoddy, lazy
and repetitive film that treats the audience like we don't have brains,
but are just hungry for them.