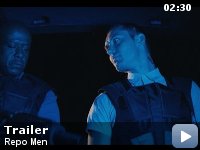 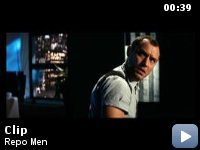 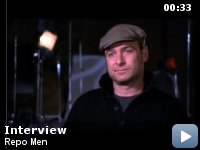 Set in the near future when artificial organs can be bought on credit, it revolves around a man who struggles to make the payments on a heart he has purchased. He must therefore go on the run before said ticker is repossessed.

Storyline
In the future humans have extended and improved our lives through highly sophisticated and expensive mechanical organs created by a company called "The Union". The dark side of these medical breakthroughs is that if you don't pay your bill, "The Union" sends its highly skilled repo men to take back its property… with no concern for your comfort or survival. Former soldier Remy is one of the best organ repo men in the business. But when he suffers a cardiac failure on the job, he awakens to find himself fitted with the company's top-of-the-line heart-replacement… as well as a hefty debt. But a side effect of the procedure is that his heart's no longer in the job. When he can't make the payments, The Union sends its toughest enforcer, Remy's former partner Jake, to track him down.

Despite the fact that this was filmed with Hawk anamorphic lenses, "Filmed in Panavision" is listed in the end credits.

It seems critics are missing the point.


SPOILERS ARE INCLUDED. THIS IS BOTH A REVIEW AND CRITICISM, SO PLOT
DETAILS ARE NECESSARY.

I find that most people who review this film are hung up on the
premise, special effects, gadgets and the many cinematic references.
It's my personal opinion that the film uses "artiforg" repossession as
a backdrop for the true conflicts, such as the cognitive dissonance we
face in certain occupations and/or the desensitization it takes to do
our jobs.

For example, we know that Remy was in the military, where
dehumanization of the enemy is common practice. If an institution can
convince its subjects that the enemy is deserving of cruelty, violent
acts are subsequently less difficult to perform on another human being.
So, it makes perfect sense that an individual like Remy has been
socialized into doing his line of work. It's not apparent to Remy how
atrocious his occupation is until he starts to recognize 1) his role in
the violence and how it affects other people in his life and 2) what it
feels like to be on the receiving end of a system that profits on
suffering and loss.

This, in itself, is a commentary on how corporations profit in our
society today. Pharmaceutical companies would be out of business if our
society had easily accessible cures for modern infectious diseases.
It's necessary for a population to treat symptoms rather than solve a
problem at its roots. "Artiforg" sale and repossession is the same
thing. Thus, as a gear in the machine, Remy has to decide for himself
whether or not his line of work is ethical.

That's where the cognitive dissonance comes into play. I think the film
did an excellent job of portraying. The metaphor here is are we correct
in criticizing corporations while supporting them and working for them
(I guess you could say it would be hypocritical then for this movie to
be made, mass produced and distributed by a corporation also)? Now, I
keep hearing a lot of criticism about the movie once Remy experiences
(spoiler) the Neural Net reality (or alternative virtual consciousness)
in which he and Beth repo one another, kill Frank, bomb the place and
run away to some tropical paradise. All this complaining about the many
cinematic references is kind of ridiculous, considering we know that
this is Remy dreaming, essentially. Are anyone's dreams completely
original all the time? I know a lot of my dreams borrow from movies
I've seen. I know a lot of books and movies borrow from other stories,
too, which has been the case for centuries. Why is this so criminal
now?

But anyway, Remy is (in my opinion) experiencing a fantasy while
distracted from physical reality. That was the whole point of the
Neural Net product in the first place. It's a means of deterring
terminally ill people from experiencing painful deaths and/or soothing
retired folks in convalescent homes dealing with prolonged loneliness.
Remy's subconscious is borrowing from his vicarious experiences. It's
quite possible an individual like Remy has seen movies like Old Boy,
2001 Space Odyssey and The Matrix. Why not?

Anyway, I think this was a great film with a lot to say and it
resonated with me quite well. I think what people look for in movies
these days spoils a lot of the major ideas. If you get caught up in
"the ending" or working your damnedest through copious Google searching
to find blurry images of yet unrevealed movie monsters, you're not
enjoying movies anymore. You're beating them to death with a spoiled
outlook on plot, cinema and characterization. Repo Men is going to be
misunderstood, in my eyes, for a long time because of this. Sorry so
many of you let that happen.