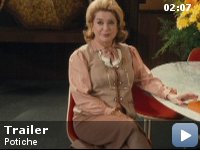 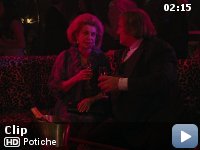 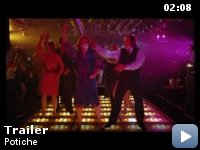 When her husband is taken hostage by his striking employees, a trophy wife (Deneuve) takes the reins of the family business and proves to be a remarkably effective leader…

Storyline
When her husband is taken hostage by his striking employees, a trophy wife (Deneuve) takes the reins of the family business and proves to be a remarkably effective leader. Business and personal complications arrive in the form of her ex-lover (Depardieu), a former union leader.

Taglines:
The trophy is coming off the shelf.

A trailer for this film is used in UK cinemas as part of the "Don't let mobile phones spoil your film" campaign run by the telecoms company Orange. The English subtitles have been replaced with new phone-related dialogue and the music in the disco sequence is replaced with a ringtone version.

Anachronisms:
Bacarra – Parlez Vous Francais, the song played when they enter the bar, came out in 1978, yet the movie is set in 1977.


Baccara & the Beegees in the soundtrack! Deneuve and Dépardieu doing
the Night Fever dance! Squirrels! Hot truck drivers with sideburns! son
Laurent who looks like Claude François, daughter Joelle with a Farrah
Fawcett hairdo: this film gets a ten+ for the art direction and a 9 for
the colourful cinematography.


As for Deneuve, in a role reminiscent of 8 Femmes' Gaby (2002 – she
made 17 movies since!) is bubbly, sparkling and the stuff movie stars
are made off – she sucks the viewer into the story.

Dépardieu, well is Dépardieu; Deneuve's husband played by Fabrice
Luchini is the weak link in the story. He never comes off as a credible
character. The kids' acting is alright, though they sometimes blend in
with the wallpaper too much. It's just a bit too much visual and too
little feeling.

Potiche is a Japanese flower pot and a merry housewife and Suzanne
Pujol at first appears both. As the drama unfolds, there is more in
Suzanne than we first thought. The story is like a soufflé, pleasant,
fluffy and at risk to implode at times.

What perhaps should be a study about women's emancipation in the
Seventies has more of a feel of a prequel to 'Dynasty a la Française',
and a whiff of British comedy 'Are you being served?' thus making the
viewer feel a bit iffy at times.

We saw this as the 5th movie at a film screening in the Netherlands,
right after Des Hommes et dieux (of gods and men – the French Oscar
submission); in that context the exuberant pastiche that made potiche
was a welcome delicious dessert of our day of digesting the finest
films. Go and see it!

Fortress of War
Hunt to Kill