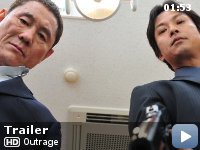 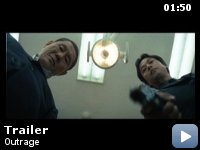 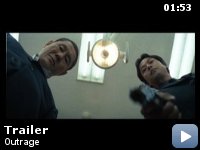 The boss of a major crime syndicate orders his lieutenant to bring a rogue gang of drug traffickers in line, a job that gets passed on to his long-suffering subordinate.

Taglines:
one wrong move and it's all out war

Apart from himself, Takeshi Kitano cast no other actor that has been in one of his films before, as per the producer's suggestion

A Welcome(?) Step Backwards for Takeshi


Outrage is the film that many fans of director Kitano Takeshi (and, no
doubt, his investors) have been clamoring for ever since he embarked on
his art-house odyssey with 2002's Dolls. The ensuing years' films
ranged from introspective (Takeshis) to wacky (Kantoku Banzai!), and
brought him critical acclaim but not much success at the box office.
Outrage is clearly designed to please fans of Takeshi's earlier films,
such as Sonatine or Violent Cop: hard-boiled gangster films taking
places in the shadowy world of Japan's yakuza.

The plot revolves around an internal power struggle within an
established yakuza family: a fairly standard trope in gangster films in
the East and West. Building on this frame Takeshi piles on a number of
events, the sequence characterized by the sort of surreally
disconnected quality that I associate with his films. It's difficult to
follow causality from one event to the next, and in many cases they
seem to operate as interesting vignettes loosely connected through the
overarching plot. Some are blackly humorous, some are brutally violent,
most are characterized by lots of yelling and cursing in the sort of
coarse Japanese that's really difficult for non-native speakers to get.
Luckily the plot is simple enough to follow, but I do wonder about
missing out on some of the finer details…

The characters are filled out only in broad strokes, and most of the
standard types are represented: the godfather-like boss, the loyal
lieutenant, the conniving underling, the dundering muscle and so on.
Takeshi gets generally excellent performances out of the cast, who
manage to come off as sincere and spontaneous. He mentioned in a recent
television interview that he shoots most of his scenes in only one or
two takes, and the film feels fresh. There's some very good talent
here, mostly genre actors but good ones. You develop sympathy for a lot
of them by the film's end, which is a mark in its favor.

One of the things I really enjoyed about the film was Takeshi's
camera-work, which remains sharp and eye-pleasing as ever. He makes
effective use of wide-angle close-ups, and does some great riffs off of
Coppola in several scenes. Long pans and still shots are also used
well. One that really sticks out in my memory from the beginning of the
film is a low, outside shot of a line of black cars, just the rear
quarter panels, lined up one after the other traveling down the road.
It's an odd shot, but serenely beautiful and effective at conveying a
sense of the power and menace of the men inside.

On the minus side, the plot really is simplistic and predictable. Not
to the extent of boredom, but once you understand the setup it's not at
all hard to imagine how things are bound to turn out. Also, I thought
the film felt, on the whole, a bit too clean. The cars in every scene
are immaculately polished, every actor is decked out in a neatly
arranged designer suit, and every set has all of its props in a neatly
prescribed arrangement. It presents a somewhat dystopic, but ultimately
whitewashed view of yakuza society that would feel retrograde in a
Western gangster film.

Overall, it's nice to see a new yakuza film come out of Takeshi's shop,
hallmarked with the same sort of black humor, extreme violence and
artistic flair that we've come to expect from this perennial festival
honoree. I would, however, have liked to see a bit more of how his
intervening films might have affected this genre. Outrage is a good
yakuza film, but doesn't do much (enough?) to step outside of its
element.