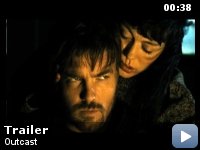 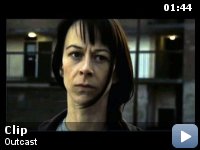 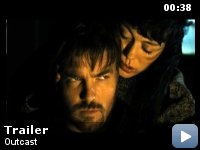 Storyline
It tells the tale of Petronella (a Scottish/Romany girl) and Fergal (her mysterious Irish traveller boyfriend). As their doomed relationship plays out, a Beast stalks the estate, killing locals, working its way towards our protagonists. Meanwhile Cathal and Liam, two mysterious travellers from Ireland use ritual and magic on a blood hunt. Mary, Fergal's mother performs ritual and magic of her own. As Cathal comes face to face with Mary in a vicious finale we know one thing: the Beast must die.

Taglines:
Beware The Beast Within

One or two smaller roles were offered to hired extras, such as Christopher Downie (Police Officer #1), as a way to stay on budget.


What do you get if you cross the plot of Let The Right One In with the
special effects of a budget Hulk movie, then set it all in
Trainspotting territory, with a bunch of Irish Gypsy mumbo jumbo thrown
in for good measure. Well, fairly obviously, you get low budget horror
thriller Outcast.


Intense, witchy Mary and her teenage son Fergal (Kate Dickie and Niall
Bruton) are on the run. But when they set fire to their van and accept
a scummy council tenancy in a run-down scheme on the outskirts of
Edinburgh, it appears that their days on the road are over. Big
mistake, as mysterious, tattooed, radge hit-man Cathal (James Nesbitt)
is hot on their heels, tracking them down using bizarre divining
rituals involving pigeons' entrails. Well, it's hardly as if the
reclusive pair are on Facebook.

But while Mary sets about weaving protective spells around their flat,
Fergal is off getting to know his new neighbourhood, and in particular
feisty 'teenager' Petronella (Hanna Stanbridge), who spends her days
caring for her mentally disabled brother while her alcoholic mother
lies sprawled on the sofa sleeping off the grog. But as a sudden,
awkward and rather unlikely romance starts to blossom, Cal is closing
in, having been given the go ahead by the local gypsy king or Laird
(played, of course, by James Cosmo, as it is illegal to make a film in
Scotland without offering him a part).

All sounds a bit strange. Well, it is, but it's also gory, gritty and
weirdly compelling – although not always terribly convincing. Perhaps I
just have trouble believing there's black magic taking place on my bus
route. Or indeed that such cheesy, playground black magic could be so
immediately effective – Rosemary's Baby this ain't.

But that aside, this is a brave film that's genuinely trying to do
something different, and while the result is at times cheap and patchy,
it's also like nothing you've seen before, a sort of dysfunctional Mike
Leigh film for the Twilight generation.

Now where did I put my jar of blood and pile of dead birds? I'm off to
cast a spell on a traffic warden…

See more of my reviews at www.elainemacintyre.net 😎