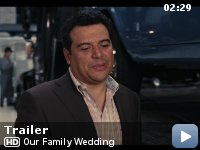 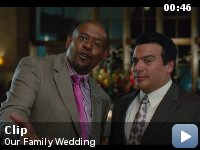 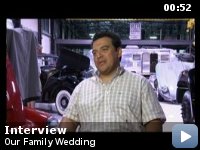 The weeks leading up to a young couple's wedding is comic and stressful, especially as their respective fathers try to lay to rest their feud.

Storyline
"Our marriage, their wedding." It's lesson number one for any newly engaged couple, and Lucia and Marcus are no exception. In Our Family Wedding, they learn the hard way that the path to saying "I do" can be rife with familial strife. When they return from college and too suddenly announce their marriage plans, they soon discover that their fathers – two highly competitive over-the-top egos – can wreak a major amount of havoc on their special day. With insults flying and tempers running high, it's anyone's guess if the alpha dads will survive to make it down the aisle in one piece. Lucia's mother is busy planning the wedding of "her" dreams and the only levelheaded one in the bunch is Angela, the groom's father's best friend and lawyer, who manages to keep her cool when the madness reaches a crescendo. With only weeks to plan their wedding…

Taglines:
To have and to hold… 'Til dads do us part.

Lupe Ontiveros played America Ferrera's mother in the film "Real Women Have Curves" (2002). In this film, she plays her grandmother.

Audio/visual unsynchronized:
During the wedding ceremony, the priest is explaining the symbolism of the "lasso" but as it is being placed on the bride and groom's shoulders, his mouth is not moving.


Do not pay attention to the ridiculously low rating this film has
accumulated. It's hardly one of the best movies you'll ever see, but it
is overall much more enjoyable than not.

The young leads are a charming, believable couple, and you do root for
them.

I thought the more obvious (meaning unfunny) racial jokes were actually
kept to a respectable minimum, considering that culture clash is the
main premise of the movie.

Some scenes work better than others. One involving the families
figuring out the "seating schematic" is quite clever and funny. One
involving a bathroom is a rather shameless and unfunny ripoff of a
scene from "Father of the Bride."

Carlos Mencia, I have to say, I don't think is funny or a particularly
good actor. I kept finding myself imagining someone else in the part
(*cough* George Lopez… or anyone else, really). But he wasn't enough
to ruin the movie for me.

The best parts of the movie were the story with Forest Whitaker and
Regina King, and anything with Charlie Murphy, who has a small but
hilarious role. The one scene featuring him and Taye Diggs was the one
time I laughed HARD. And yes, as another reviewer pointed out, the
actress playing the sister was excellent.

Most of the plot points are predictable, yes, but I didn't really hold
that against "Our Family Wedding." I at least had a better time than
I've had at most real weddings. I give it a 6 out of 10.

TagsUSA
The Round Up
Heartbreaker