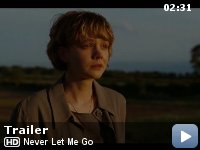 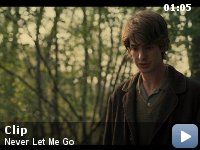 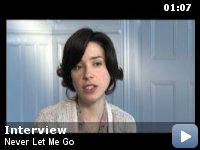 As children, Ruth, Kathy and Tommy, spend their childhood at a seemingly idyllic English boarding school…

Storyline
As children, Ruth, Kathy and Tommy, spend their childhood at a seemingly idyllic English boarding school. As they grow into young adults, they find that they have to come to terms with the strength of the love they feel for each other, while preparing themselves for the haunting reality that awaits them.

Carey Mulligan had to learn how to drive for this movie and did a two-week intensive course but failed the driving test. The production team had to shoot the scene on a private road, where she was allowed to get behind the wheel.

Continuity:
In one shot the red Volvo estate that Rodney drives can clearly be seen to be an 'A' registration from 1983/4, yet in a later shot it's registration changes to 'G' meaning that the car was manufactured in 1989/1990.

Kathy:
My name is Kathy H. I'm 28 years old. I've been a carer for nine years. And I'm good at my job. My patients always do better than expected, and are hardly ever classified as agitated, even if they're about to make a donation. I'm not trying to boast…

Just ahead, I'll tell you how to know if you'll love or hate this movie
(very few will be in between). But first, I'm always surprised to see
people reading the novel, rushing to the movie, and then expressing
disappointment with remarks such as, "there are gaping holes." A 2-hour
movie is a 110-page screenplay, which means a 300-page novel becomes a
6-hour miniseries. Get Martin Scorcese, hire "Never Let Me Go" novelist
Kazuo Ishiguro to write the screenplay, and cast it right, and you'll
have a shot at making a miniseries that CAN be compared to the novel;
otherwise, let's understand the limitation and let the film stand on
its own. I didn't read Ishiguro's novel, and I found Mark Romanek's
film (screenplay by Alex Garland) to be a beautiful, profound and
complete meditation on life. It demonstrates the best and worst of
human behavior, the beauty of undying love, and the heroism of
accepting responsibility (or fate in this case). To me, the story is
uplifting and memorable, in spite of its overall sad and melancholy
tone. What's more, it's seamless, from the superb performances by Carey
Mulligan, Keira Knightley, and Andrew Garfield, to the near perfect
direction by Romanek, to its gorgeous cinematography with muted color
palette, to its precise wabi-sabi production design (the beauty of worn
and broken things). But how can you know if you'll like this film or
not?


Forget the Sci-Fi angle; it's insignificant except as a stepping-off
point for a story that reveals great truths: That life is short, your
choices have consequences, and at the end none of us may feel we've had
enough time to love, or just get things right. But I can safely say…
If you interpret your movies literally, you will not like this film. If
you need action, a fast pace, explosions and special effects, you will
not like this film. If your idea of a great movie is Inception, forget
it.

On the other hand, if you can appreciate a fine story by Henry James,
Edith Wharton, or Katherine Anne Porter, this film is made for you. If
you enjoyed Todd Haynes' lovely melodrama, Far from Heaven, or Oren
Moverman's powerful movie, The Messenger, or Tom Ford's poignant film,
A Single Man, you'll love this picture. The story addresses themes of
love, longing, jealousy, betrayal, courage, atonement, and perhaps most
important "acceptance." The film also asks us to consider the "morality
of science," and some might find this aspect chilling, but to me the
larger human themes overwhelm this one.

When I saw Never Let Me Go, the theater was about one-third full, but
probably one-third of these folks walked out by the half-way point.
And, surprisingly, the couple sitting behind me got up and walked out
10 minutes before the end, once they were convinced (revealed by their
groans) that the story would not have a happy ending. Apparently, they
were looking for the "feel good movie of the year." Sadly, they missed
the most extraordinary and beautiful ending — most of the emotional
power comes in that last 10 minutes — but then I suppose they wouldn't
have understood it. But to me, Never Let Me Go is the "feel good movie
of the year," precisely because it tells the truth: life is beautiful
because there are hopes and dreams, love and loss, tears and tragedies.

One final note: Keira Knightley and Andrew Garfield are excellent in
their roles, but Carey Mulligan is the standout — she shows a wisdom
and weariness far beyond her years, and handles difficult emotional
material with a sublime restraint that makes the whole thing work. I
feel we are witnessing the early work of the next Deborah Kerr, Sarah
Miles, or Vanessa Redgrave.

This is an excellent film, one of the best of the year, and not to be
missed by those who appreciate depth and literary quality.