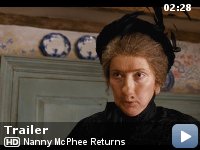 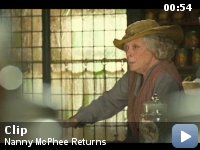 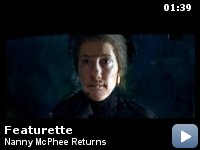 Nanny McPhee arrives to help a harried young mother who is trying to run the family farm while her husband is away at war, though she uses her magic to teach the woman's children and their two spoiled cousins five new lessons.

Storyline
Nanny McPhee arrives to help a harried young mother who is trying to run the family farm while her husband is away at war, though she uses her magic to teach the woman's children and their two spoiled cousins five new lessons.

A real elephant had been cast for the film but unfortunately contracted a virus and died.

Continuity:
At different times, the sidecar is on the left or right side of Nanny's motorcycle.


Emma Thompson once again pens and stars in the candy-coloured film
adaptation of the children's' books by Christianna Brand, following a
very strict and very ugly nanny who brings order and manners to a
household full of naughty children. This outing sees the titular
character nursing a farmhouse family whose father is off at war. The
mother, played by Maggie Gyllenhaal is obliged the sell the land to her
nasty brother (Rhys Ifans), a slimy character who will not rest till he
gets his way. Meanwhile the children's' vile London cousins come to
stay – two little brats who bawk at the state of the earthy farm abode.


Enter Nanny McPhee – an otherworldly being who appears when a family
needs her most – squashed-nosed and snaggle-toothed, she calmly teaches
the children five important lessons, though when things get out of hand
she must employ the same supernatural technique of setting down her
walking stick as she did in her previous adventure, and to spectacular
effect. Nanny McPhee attempts to set the household to rights using
these very methods, while the family struggle on with their visitors
and hope against hope that their father will return.

Thanks to Emma Thompson's involvement, the film boasts a impressive
array of British thespians including Maggie Smith, Ewan McGregor and
Ralph Fiennes as a senior WW2 army officer. Though characterisation is
hardly profound in a story such as this, each actor has their moment to
shine – and Gyllenhaal, as the young mother, sports a flawless British
accent and conveys her trademark maternal emotion when needs be.
Production values are stellar, with all the period details on display.
The film whisks along at a nice pace and never gets bogged down in one
place – Thompson's adaptation is wrought with real warmth and wit, and
once again she works wonders on-screen under layers of prosthetics,
with every wry glance and raise of the eyebrow worthy of a laugh.

Setting the story of against the backdrop of World War II is very smart
move – the 'big bang' in the title referring to the imminent threat of
bombings during this time period. This gives the film a foundation of
realism that the previous movie lacked….however, there's little room
left for war time misery in the thematic threads of this story – you're
more like to find a group of piglets doing synchronised swimming than
any sign of a swastika.

Ultimately this is a family film, written for children – talking to
them, not at them and carrying a very sensitive message at its heart.
There are no double-entendres for the adults the snigger at, this is
harmless entertainment at its best. It may not be a new classic but
it's nice to see something like this making its way to our screens
during the Easter break.