Love and Other Drugs 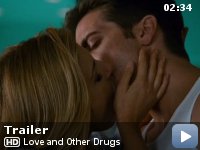 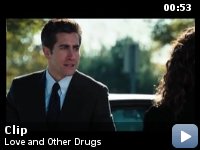 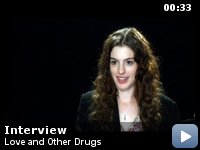 A woman suffering from Parkinson's befriends a drug rep working for Pfizer against 1990s Pittsburgh backdrop.

Storyline
Maggie (Hathaway) is an alluring free spirit who won't let anyone – or anything – tie her down. But she meets her match in Jamie (Gyllenhaal), whose relentless and nearly infallible charm serve him well with the ladies and in the cutthroat world of pharmaceutical sales. Maggie and Jamie's evolving relationship takes them both by surprise, as they find themselves under the influence of the ultimate drug: love.

In setting up the sex scenes the actors were encouraged to improvise, but with their clothes on. Edward Zwick says that it's "colder" on a set because there are people all around, the camera, and distractions. So the improvisation was useful in setting the scene and shots for the actual shoot.

Errors made by characters (possibly deliberate errors by the filmmakers):
Trey refers to himself as "an ex-Marine". An actual Marine would never use that phrase. The status of being a Marine is retained for life, hence the motto "Once a Marine, always a Marine". It would have been more appropriate to have him refer to himself as "a Marine veteran".

Jamie Randall:
Sometimes the things you want the most don't happen and what you least expect happens. I don't know – you meet thousands of people and none of them really touch you. And then you meet one person and your life is changed forever.

Expected what I saw in the trailer and got more


Despite what some may say, Love and Other Drugs wasn't like other
romantic comedies I've seen except in the most general of senses, in
that it was a romantic comedy. I hadn't seen one set in the environment
of pharmaceutical sales or with a main character who had Parkinsons
disease, a setting which is very interesting as there are a lot of
things wrong with health care and the system today. It gives one
something to chew on while watching the rest of the movie.


There's a lot to like about the relationship between Jamie and Maggie.
They have a raw intensity and passion for each other that was a bit
much for some viewers, but in my opinion it was there to show how
connected they were both physically and mentally. I thought their
banter and teasing nature was cute. Nobody got wounded or sulked when
teased but just laughed and teased back. The initial attraction between
them started as an understanding of each other's loneliness and
vulnerability that allowed them to feel like someone else finally got
them after easily charming others with nothing more than a fascade.
Their relationship had passion, love, and a roller-coaster of emotions.

There was a scene midway through the movie where Maggie tells Jamie
that even though she may have many other moments like the ones that she
shared with him that it will never be as special or mean as much to her
and my heart wanted to swell because I knew exactly what she meant and
what it is like to love someone that much.

As they grew together, both characters changed and let go of their
issues with commitment and love. They tore down the walls they'd built
to protect themselves and just let themselves fall. It was beautiful to
me and I really enjoyed Love & Other Drugs.