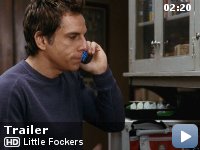 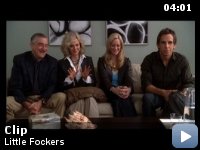 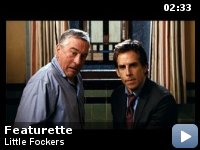 Family-patriarch Jack Byrnes wants to appoint a successor. Does his son-in-law, the male nurse Greg Focker have what it takes?

Storyline
It has taken 10 years, two little Fockers with wife Pam, and countless hurdles for Greg to finally get in with his tightly wound father-in-law, Jack. After the cash-strapped dad takes a job moonlighting for a drug company, however, Jack's suspicions about his favorite male nurse come roaring back. When Greg and Pam's entire clan–including Pam's lovelorn ex, Kevin (Owen Wilson)–descends for the twins' birthday party, Greg must prove to the skeptical Jack that he's fully capable as the man of the house. But with all the misunderstandings, spying, and covert missions, will Greg pass Jack's final test and become the family's next patriarch, or will the circle of trust be broken for good?

Taglines:
The Fockers are back & funnier than ever.

When Robert De Niro won the Lifetime Achievement Award at the Golden Globes he remarked: "I was very, very moved and gratified when you made the announcement (of this award) two months ago, well before you had a chance to review Little Fockers."

Greg Focker:
I'm getting off the wheel.

Greg Focker:
[losing it]
The wheel! The little hamster wheel that we're all running up to get a little taste of your little water thingy!
[imitates a hamster]

Greg Focker:
Just, please, approval! Approval! Please! Give me some of the Jack… yeah…


Okay so you know the premise with these types of films, you've got your
father in-law and your son in-law arguing while the rest of their
family watch them get into zany situations. Being such a used formula,
you can guess what's going to happen, this isn't a problem with
comedies as their jokes are what hold them up, right?


My main problem with the film is that there were no jokes, the entire
audience was silent, the only laughter I heard was from some teenage
girls laughing at a scene involving a needle and someone's penis. I
wouldn't have minded puns, or cheesy jokes, or embarrassing situations,
but the film was just like a drama that wasn't very dramatic.

I felt like the film didn't know what it wanted to be, the title
"Little Fockers" implies that the children are the main focus, but the
two children are barely in the film and when they were, they were just
a bit annoying. The film is definitely not a family film, it's heavily
sexually based, I wouldn't advise taking your children to see this, but
then adults won't find the humour very funny.

The acting wasn't bad to be perfectly honest, the line up is good and I
felt that the characters were believable. As for messages? The film
carries some messages about family loyalties and priorities, but
doesn't every film like this carry that message?

I don't like sounding too negative, but the bottom line is that I
didn't enjoy this film, simple as that. If you like these kinds of
films then I would suggest renting it some time, it's not as bad as I
may have made it sound, but it's still pretty bad in my opinion. I hope
this review helped you, and maybe saved you some money.

TagsUSA
Montevideo: Taste of a Dream
The Nutcracker in 3D