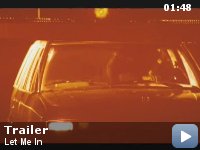 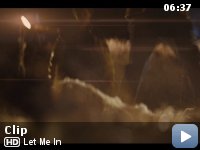 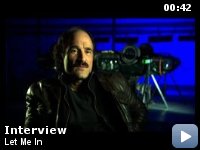 A bullied young boy befriends a young female vampire who lives in secrecy with her guardian.

Storyline
In Los Alamos, New Mexico, the twelve year-old Owen is a lonely and outcast boy bullied in school by Kenny and two other classmates; at home, Owen dreams of avenging the trio of bullies. He befriends his twelve-year-old next door neighbor, Abby, who only appears during the night in the playground of their building. Meanwhile, Abby's father is a wanted serial-killer who drains the blood of his victims to supply Abby, who is actually an ancient vampire. Abby advises Owen to fight Kenny; however, soon he discovers that she is a vampire, and he feels fear and love for the girl. Meanwhile a police officer is investigating the murder cases, believing that it is a satanic cult.

Anachronisms:
The Now and Laters seen in this movie have had that logo since the early 1990s. The movie takes place during the early 1980s.

Paramedic #1:
One-three-one to dispatch, come in.

Radio Dispatcher:
[after delay]
One-three-one, this is dispatch, go ahead.

Paramedic #1:
This is one-three-one. We have a male, mid 50s, with burns over nine to nine and a half percent of his body. Prior to arrival on scene, the patient apparently doused his head, neck and face with some sort of highly concentrated acid. patient's airway severely compromised due to fume inhalation. Vital signs undetermined. Please advise, patient is a federal suspect. We're coming in with a police escort right now.


Given the background to this film, I must start by saying I have
neither read the book it is based on, nor seen the 2008 Swedish
original. After watching this masterpiece, I intend to do both.

This is a truly sensational film. When you can't really pin a film down
to a specific genre, you know you're onto something special. Calling
this film a "vampire movie" doesn't really do it justice, given the
preconceived notions most film goers bring to the genre. It is part
horror, part dark family drama, part love story, with all 3 categories
succeeding admirably.

In my estimation, the director has come on in leaps and bounds since
"Cloverfield", a movie with a clever idea that was hampered by a poor
cast and so-so execution. Here the director sets a mood of oppression
and isolation from the very earliest frames and never lets up. The
locations are used superbly, as are lighting and sound to create the
gloomy world poor Owen is stranded in.

The film undeniably belongs to Chloe Grace Moretz as the young vampire
Abby. This girl is an absolute powerhouse of an actress, turning in a
dark, subtle and convincing performance that belies her tender age of
12. If she does not make the shortlist for next year's Oscars, the
Academy needs its collective head examined. She embodies the potent
mixture of lovable innocence and animalistic darkness within Abby with
such ease, you will be genuinely astounded.

My fellow Aussie, Kodi Smit-McPhee, is also excellent, making you
really feel for the put-upon Owen and share in his joy at finding a
spark of happiness with the mysterious Abby. The entire film falls
apart if this pair fail to convince, so it is a testimony to their
respective talents (particularly Moretz') that you invest so heavily in
their relationship.

Don't let the press about this film being a remake put you off. I must
say I'm very disappointed to see this hasn't done too well at the box
office in the USA, as it is a vastly superior film to the likes of
"Paranormal Activity 2".

If anyone is in two minds about seeing this film, take the gamble and
shell out your hard-earned. You'll be glad you did, if for no other
reason than witnessing one of the most impressive performances by a
child actor in cinema history.