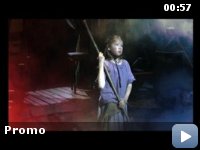 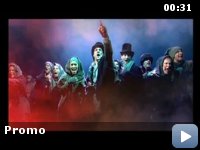 All of the original cast members return to perform the final reprise of One Day More, save for David Burt the original London Enjolras, who claimed he didn't feel vocally up to the part any more.

Enjolras:
Tie this man and take him To the tavern in there. The people will decide your fate, Inspector Javert!

Javert:
Shoot me now or shoot me later Every schoolboy to his sport! Death to each and every traitor, I renounce your people's court!

Enjolras:
Take this man and bring him through, there is work we have to do!


Les Misérables has been around for a long time, pleasing audiences
around the world – its songs are recorded by an vast array of singers
and its impact on audiences is justifiably powerful. Though this
filming of the concert production of the musical as performed at
London's O2 Arena in January 2010 is hailed as the 25th anniversary of
the musical, it is too frequently forgotten that the show, based on the
Victor Hugo novel, was originally written by Claude-Michel Schönberg
and Alain Boubil with Herbert Kretzmer and Jean-Marc Natel and produced
in Paris, France in 1980 (it closed after 3 months). This English
Adaptation is by Trevor Nunn and John Caird (with additional material
by James Fenton) was brought to England and the world through the
efforts of Cameron Mitchell in 1985.


The concert version is performed with orchestra and chorus in the top
of the platforms in O2 Arena and the characters in the musical are in
costume standing before microphones at the edge of the performing
structure. The light crew performs spectacular effects with the
enormous facilities at this 23,000 seat arena. Some action is projected
on screens above the performers (the lifting of the cart by Valjean,
the barricade, etc) and at other times the screens offer the audience
huge close-up view of the performers. It works well under the direction
of Nick Morris. The celebration of the birthday of the show is
accompanied by prolonged appearances by past members of casts of the
show, a light show, and much confetti and self congratulation speeches.

As for the production itself it is populate by a generally strong cast.
Alfie Boe, a 37 year old British tenor who studied opera but now sings
the big demanding musicals, is a very fine Jean Valjean. Norm Lewis,
and American actor/baritone is one of the strongest Jauverts on record:
he is a talent to watch. Lea Salonga brings years of experience to her
interpretation of Fantine, Samantha Banks is a very strong Eponine, the
Iranian-born Canadian musical theater singing actor Ramin Karimloo
makes a striking impression in the role of Enjolras (he has been
playing the role of Phantom in the 'Phantom of the Opera' in England
for years), but the performance of Katie Hall as Cosette sounds
strained, the Monsieur Thénardier of Matt Lucas is completely unfocused
(Jenny Galloway fares better as Madame Thénardier), and it is obvious
the producers elected to play to the young audience by miscasting pop
star Nick Jonas as Marius: he tries very hard but is out of his league
here.

In all this is an entertaining memento of a birthday celebration –
heavy on audience screaming and special party effects – and rewards the
creators of this lasting fine musical with due respect.