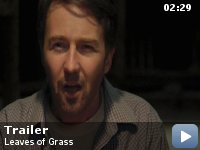 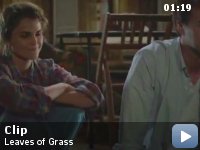 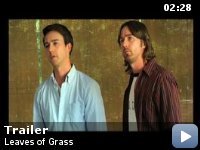 An Ivy League professor is lured back to his Oklahoma hometown, where his twin brother, a small-time pot grower, has concocted a scheme to take down a local drug lord.

Storyline
The lives of two identical twins, one an Ivy League philosophy professor, the other a small-time and brilliant marijuana grower, intertwine when the professor is lured back to his Oklahoma hometown for a doomed scheme against a local drug lord.

Edward Norton was so desperate to star in this movie that he took a pay cut, stating in an interview that he "actually got paid half what I usually make".

Continuity:
When Brady wakes Bill up to show him his new haircut and have him visit his mother, Bill's hair is unkempt. When the shot goes back to Bill his hair is magically brushed.

Rabbi Zimmerman:
We are animals, Professor Kincaid… with brains that trick us into thinking we aren't.

Profound, poignant and hilarious with a commendably askew approach – an ideal character study


It is fascinating to see certain movies that achieve a specific balance
between the familiar and the unique, a particular dynamic perfectly
representative of writer/director/actor Tim Blake Nelson's Leaves of
Grass. On the surface, the film's prevailing themes of family,
reconciliation with one's roots and the tensions between
educated/"upper" class and working/"lower" class are identifiable as
those articulated in countless films and other cultural texts,
suggesting just one more re-tread of the same material. At the same
time, in an elusive sense, the particular angle the material is
addressed feels somehow fresh and unique, making Leaves of Grass
particularly vibrant, dynamic and compelling, both as a narrative and
individual character study.


In its most distilled essence, the film charts a rampantly successful
Ivy League philosophy professor (Norton) forced to return to and come
to terms with his less than glamorous family ties in Tulsa, Oklahoma.
Of course the narrative covers significantly more ground than that,
particularly the professor being sucked into an ill-advised and hardly
legal scheme by his madcap, drug dealer twin brother (also Norton), but
Nelson returns so continuously to the aforementioned central themes
that the increasingly complex plot surrounding them runs the risk of
feeling somewhat besides the point, as enjoyable as it is. However, it
is through evolving such a complex web of narrative that Nelson's film
feels all the more unique, allowing him to tackle often covered themes
with not only a more fresh and indirect approach, but also a great deal
more authenticity. Each of the film's characters, as colourful and
occasionally larger than life as they may be, feels strikingly real,
making their actions and interactions within such a convoluted story
alternatively more resonant and hilarious, as if each are playing the
'straight man' against an increasingly madcap story unfolding around
them.

With the same charming, powerful yet slightly kooky tone which pervades
many of his acting performances, Nelson sets up his film in a
wonderfully askew fashion, taking delight in veering right when the
logical narrative progression would suggest left, and offering a fair
share of surprise twists, including several jarring or downright
uncomfortable bursts of serious intensity discordantly changing
altering the generally breezy mood. However thematically familiar, the
framework of Nelson's film does feel refreshingly unexpected, even if
it does somewhat lose its momentum towards the end, trundling towards a
denouement that feels somewhat under-thought or vaguely less than
effective. Nonetheless, a lively musical score and crisp editing propel
the film along at a generally steady pace, assuring that despite the
rare stumbling, Nelson's film feels fundamentally alive, truthful and
riotously enjoyable.

But, as is common with such character-focused material, it is the cast
that ultimately drives the story home. Nelson himself has admitted that
he wrote the lead twin characters for Edward Norton, and it is
impossible to imagine any other performer offering two such superbly
nuanced, powerful and entertaining, not to mention fundamentally
different characterizations within a single film, managing the rarely
seen trick of playing off himself to perfection. Norton infuses so much
life, passion and charisma of such varied sorts into both roles that it
is easy to forget they are played by the same actor – a masterclass of
acting propelling the emotional centre of the film, and almost
singlehandedly making it merit viewing. Keri Russell is similarly
fantastic, channeling her trademark sweet, down to earth charm into her
performance as a reflective poet and teacher – her riverside
philosophical musings make for some of the most quietly
thought-provoking and enjoyable cinematic asides of quite some time.
Tim Blake Nelson himself manages several laughs and sturdy emotional
support as a stoic fellow marijuana grower, and Susan Sarandon offers
raw and frequently hilarious emotional vulnerability as both Nortons'
ex-hippie mother, forced to reflect on a life of questionable choices.
Finally, in a tragically but necessarily brief role, Richard Dreyfuss
is hilarious as a respectable Tulsa philanthropist with several shady
ties to the less respectable underbelly of the community, making his
few scenes shine with shrewd hilarity.

Wacky yet poignantly credible, Nelson's film hits its stride through
its melding of familiar content with unfamiliar approach, propelled by
a careful, clever script and tremendously memorable characters. In an
age filled with ambitious studio films making hefty grabs at easy
emotion, it is a delight to witness cinema that manages something
powerful, profound and incredibly enjoyable without obvious, clichéd
emotional hooks of any sort, making Leaves of Grass without question
worth a watch.