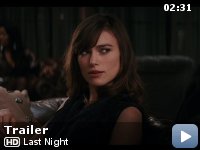 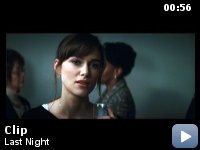 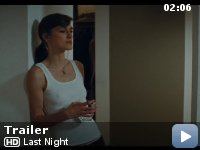 The story follows a married couple, apart for a night while the husband takes a business trip with a colleague to whom he's attracted. While he's resisting temptation, his wife encounters her past love.

Storyline
Joanna accuses her husband, Michael, of being attracted to his co-worker. Wanting to make-up before he goes on a business trip, she assumes she over-reacted. But when they are both away from each other for one night, Michael ends up testing his loyalty to Joanna and his attraction to Laura. And Joanna tests her honesty to Michael when her ex-boyfriend Alex suddenly appears in New York for the day.

Jessica Biel auditioned for the role of Joanna Reed.

Joanna Reed:
Once you know something like that, you can't unlearn it.


Rather enjoyed this film at the Rome Film Festival last night. The
atmosphere of New York by night and the soundtrack itself made it worth
the half an hour delay getting in! The main performances are strong,
Keira puts in a surprisingly convincing interpretation as the wife who
meets her previous love the day her husband is out of town with a
female colleague he likes. It discusses the nature of love, betrayal,
marriage and sentiment in a thoughtful way, without the usual labelling
of people as cheaters and victims. It should encourage us to realise
that life and relationships are more complex and that ultimately,
nobody really belongs to anyone (however much we might like to think we
do). It's a shame these days that we only get to see the lives of the
beautiful, very well-to-do folk (in their wonderful apartments, sipping
on fine wine) on the big screen as if temptation within marriage was a
luxury that only the wealthy and obscenely photogenic can afford.
Anyway, universal themes are dealt with well and it's good fodder for a
long conversation afterwards.