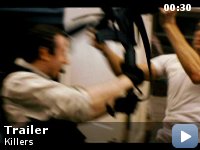 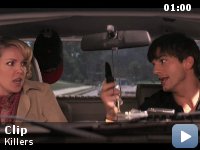 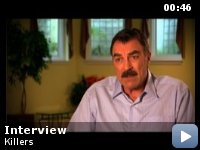 A vacationing woman meets her ideal man, leading to a swift marriage. Back at home, however, their idyllic life is upset when they discover their neighbors could be assassins who have been contracted to kill the couple.

Storyline
Spencer Aimes is just your average, undercover, government-hired super-assassin accustomed to a life of exotic European locales, flashy sports cars and even flashier women. But when he meets Jen Kornfeldt, a beautiful, fun-loving computer tech recovering from a bad break-up, he finds true love…and happily trades international intrigue for domestic bliss. Three years later, Spencer and Jen are still enjoying a picture-perfect marriage – that is, until the morning after Spencer's 30th birthday. That's when Spencer and Jen learn he's the target of a multi-million dollar hit. Even worse, the hired killers have been stalking the happy couple for years, and could be anyone: friends, neighbors, the grocery store clerk, even that crabby old guy shuffling across the street. Now Spencer and Jen are on the run for their lives. As their suburban paradise turns into a paranoid game of dodge-the-bullet…

Taglines:
Marriage… give it your best shot.

During filming, Ashton Kutcher accidentally knocked out a stunt man with his fist.

Continuity:
When Spencer and Henry are chasing each other around the construction site the orange mesh fence caught on the bumper of Henry's car moves from covering the bumper and the lower part of the hood to up on the back part of the hood near the windshield and then back down to cover the bumper again several times.

Spencer Aimes:
We've been married for three years and we've never been more than five minutes away from your parents. They're always coming over and your dad's all… all… Well, uh, this is how the Kornfeldt's load the dishwasher. And, mow the lawn clockwise 'cause that's the Kornfeldt way. Take this piece of coal, stick it up your kiester, squeeze it real tight like we do, and you'll and make a Kornfeldt diamond.

There are two kinds of bad movies: The so-bad-it's-good, and so
bad-it-hurts. But then, there is Killers; an amorphous blob that exists
in a vacuum where no films has ever been made before. It's not a comedy
in the sense it's assembled out of jokes and humorous conflicts —
Killers constructs its own parallel universe reality and giddily makes
fun of it. And it's not an action in the sense that good guys and bad
guys chase one another — Killers' has a snake-eating-its-tail moral
stance. Killers is Meta in the truest sense of the word, and it's not
even aware of it.

Critically analyzing Killers is like reasoning with an alligator before
it eats you alive; it's a waste of precious time better used for self
reconcile. The only shinning piece of the film is Heigl's teeth. The
script seems to have begun its existence as a Mr. & Mrs. Smith book
report, rewritten by a conspiracy theorist, and finally polished by an
ESL student. It tells the story of sweet Jen (Heigl) who while
vacationing with her parents (Selleck and O'Hara) in France, meets the
ripped Spencer (Kutcher), and instantly falls in love. Spencer is a
professional assassin, but after a few minutes with Jen he decides to
leave all that behind him.

The film is not in a hurry to tell is story, mostly due to the fact
there is none. The couple gets married, move together and three years
later (and half way through the film) his old boss calls him again,
'you're ain't going out that easy' he promises, and he's right on the
money. All hell breaks lose, and almost everyone who gets introduced
during the first half turns out to be a gunman hired to kill Spencer.

Kutcher is detail-oriented twitterer, and as an actor, his goofiness is
unmatched. Up until the end, Kutcher monotone performance came across
as lack of talent. But after the surreal note the film ended on, it
made perfect sense. Him and Heigl have the best anti-chemistry, and
casting them together was an unintentional stroke of genius; He's the
Laurel to her Hardy.

Enjoying the Killers depends entirely on your expectations and
gullibility. Despite the film's colossal shortcomings, it still manages
to make you laugh with its idiosyncrasies. You'll laughing mostly out
of confusion, but it's laughter never the less; Kutcher's latest
installment in the Dude Where is My Car tradition.