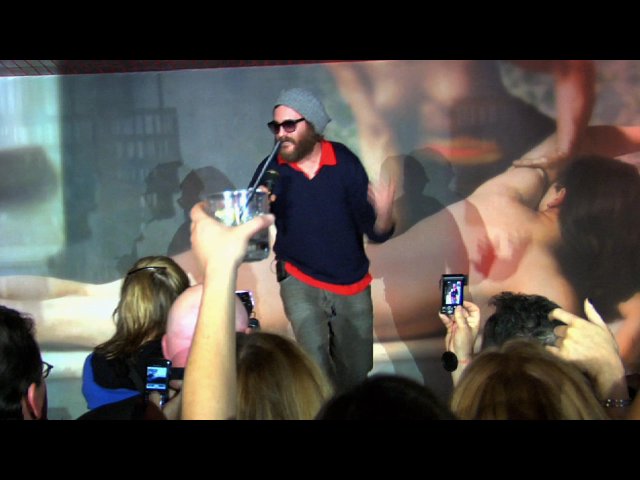 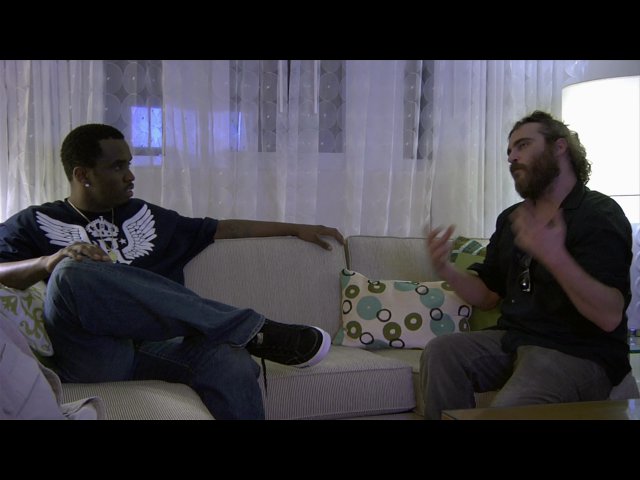 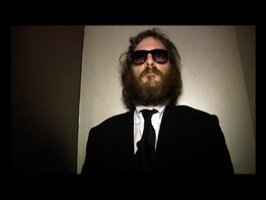 Documenting Joaquin Phoenix's transition from the acting world to a career as an aspiring rapper.

Storyline
In 2008 while rehearsing for a charity event, actor Joaquin Phoenix, with Casey Affleck's camera watching, tells people he's quitting to pursue a career in rap music. Over the next year, we watch the actor write, rehearse, and perform to an audience. He importunes Sean Combs in hopes he'll produce the record. We see the actor in his home: he parties, smokes, bawls out his two-man entourage, talks philosophy with Affleck, and comments on celebrity.

Edward James Olmos:
That's you, drops of water and you're on top of the mountain of success. But one day you start sliding down the mountain and you think wait a minute; I'm a mountain top water drop. I don't belong in this valley, this river, this low dark ocean with all these drops of water…

This is brilliant work. I don't understand all the derision.


Somehow, I feel like one of the only people who thinks this movie is
absolutely genius and incredibly funny. Many leading critics seem to
have missed the fact that this is a ruse. Reading in the NYT yesterday
that Casey Affleck admitted it was not "reality" probably aided my
ability to view the movie the way I did, but I am surprised that so
many people have a negative reaction to what Affleck and Phoenix
present and couldn't see the bigger picture even before the revelation
was made. I am looking forward to J.P's appearance on Letterman next
week, when I believe we will learn a lot more about their motivation in
its production. In the meantime, however, I think a few things can be
said that will not prove to be altogether ignorant on my part.


First, this a movie made by professional actors. This is not Casey
Affleck following a Joaquin Phoenix lacking self-awareness around with
a camera because they have nothing better to do. It is a deliberate
effort to create, and they are both collaborating. That should give
everyone a good starting point. It is a real movie with thoughtful
development, not the work of pedestrian journalists. With that in mind,
it is easy to see just how much fun it would have been to make.

The primary "conflict" in the movie is Joaquin's discomfort with the
pressures on him and the risks he is taking in the face of so many
expectations to keep producing the kinds of movies that won him
accolades. The viewer who thinks the film is true life will believe he
is throwing away a great movie career because he is the typical tragic
celebrity who has it all, can't recognize it, is under chemical
influence, and has no one around who cares enough to intervene. There
are far too many clues to let that impression control throughout the
film.

When J.P. delivers monologues about how he's putting it all on the
line, what we should understand is that the fake J.P. is talking about
his hip-hop dream, while the real J.P. is acknowledging the risk he is
taking by staying out of glossy big-budget blockbusters he had at his
fingertips after Walk the Line. Keep in mind: he had to be this
character for almost two whole years in order to make anyone bother to
watch the movie. When you stack this kind of dedication up against a
stupid movie about the drama behind Facebook, the farce of Jersey
Shore, another crime movie set in Boston, and all the other garbage out
there, I'm Still Here stands out as cutting-edge performance.

Comparisons are easily made to works of Sacha Baron Cohen and
Christopher Guest. The primary difference is the real-world gambit of
Phoenix and the manipulation of the media, expanding the stage of
performance beyond the theaters. And the audience isn't spoon-fed the
humor. Yeah, they probably ticked off a lot of suited business people
who wanted Phoenix to be predictable and stay in bounds, but the very
point of the movie was that the Hollywood system is a fenced-in joke of
a society and very easy to toy with. Of course, the sad truth is that
so many fine performers have indeed self-destructed in similar fashion.
Perhaps that is why people are uncomfortable with the movie; because it
is plausible. But if J.P. can deceive so many so easily, it is all the
more a masterpiece.