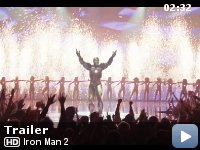 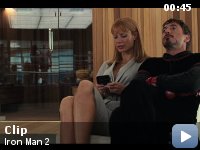 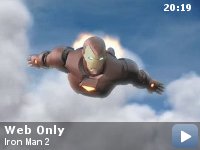 Because of his superhero alter ego, Tony Stark must contend with deadly issues involving the government, his own friends and new enemies.

Storyline
With the world now aware of his dual life as the armored superhero Iron Man, billionaire inventor Tony Stark faces pressure from the government, the press, and the public to share his technology with the military. Unwilling to let go of his invention, Stark, along with Pepper Potts, and James "Rhodey" Rhodes at his side, must forge new alliances – and confront powerful enemies.

Six Formula One cars were provided by the Historic Grand Prix Association.

Continuity:
When Ivan Vanko has dinner with Justin Hammer in the airport hanger the wine and water glasses continually change position and volume.

[In Moscow, an old man watches a broadcast on TV]

Tony Stark:
[on TV]
There's been speculation that I was involved in the events that occurred on the freeway and the rooftop…

Christine Everhart:
[on TV]
I'm sorry, Mr. Stark, but do you honestly expect us to believe that that was a bodyguard in a suit that conveniently appeared, despite the fact that…

Tony Stark:
[on TV]
I know that it's confusing. It is one thing to question the official story, and another thing entirely to make wild accusations, or insinuate that I'm a superhero. that would be outlandish and, uh, fantastic. I'm just not the hero type. Clearly. With this laundry list of character defects, all the mistakes I've made, largely public…
[…]

It's solid entertainment, but lacks the class of it's predecessor

Saw the movie in a press screening here are my humble thoughts:

Before I start with my short review of Iron Man 2, I have to say two
words about Iron Man 1. I really dug the first one despite of being a
little disappointed by the grand finale. Robert Downey Jr. kills it,
action, humor, pacing… loved it. I'm not a big comic geek, and not
that familiar with the original Iron Man comics, so please excuse if
some of the stuff I thought was weird, was actually accurate adapted.

So while the opening credits where rolling and I saw all the big names
of actors that I happen to love, I really thought that it might be hard
to give all of them a fair amount of stuff to do in the movie. And as
it happened to turn out, I was right. I was especially disappointed by
Mickey Rourke's part as Whiplash. Don't get me wrong, Rourke was great.
He looks mean as usual and I loved every scene he's in. Unfortunately
Favreau really pulled a Darth Maul on him. After the last fight I
honestly sat in my chair and was like "that's it? you can't be
serious?!". Rourke's Character had almost the same potential (at least
from his talent as an actor and his looks in the movie) as Heath
Ledger's Joker in Dark Knight. But he never lived up to that
expectation due to the lack of screen time and, well… a purpose.

But the main problem I had with Iron Man 2 was the lack of a meaningful
story and motivation for almost all of the characters. We are
introduced to Scarlett Johansson's "Black Widow", and blame it on my
lack of knowledge of the graphic novels, but I had no Idea what her
purpose in the movie was. The first part of the movie she's just the
hot secretary with almost no lines. Eventually she puts on a tight
super hero costume and tries to find Whiplash. There is a brief
action-sequence, where she kicks some ass, but truth be told, Hit-Girl
would wipe the floor with Black Widow. What I really liked though, was
Sam Rockwell as Justin Hammer. He totally killed it and you can tell he
enjoyed his part as the sleazy scumbag pulling the strings in the
background.

I also liked Don Cheadle as James Rhodes (he was on par with Terrence
Howard on this one), but I felt his character suffered from the lack of
time for character development. There is this scene, where Tony Stark
is seriously messed up, partying at his home in his Iron Man suit and
randomly shooting stuff. Rhodes is tired of the situation and grabs
himself another one of the Iron Man suits, battles Stark and than
leaves. With the suit. I don't know if that's the way it was done in
the comics, but I didn't like it at all. In the first movie we witness
how Stark becomes Iron Man, how he needs to learn to use the suit and
become one with it, how he builds it and we can understand, that he is
the only one, who could use it that way. Apparently we're wrong,
because all you need, is the suit. It's like anyone could be Batman, if
he just could get a hold of his cape. There is no explanation as to why
Rhodes can fly this suit like he owns it, there isn't anything told
about the relationship between Stark and Rhodes. I just felt this part
was incredible weak.

The whole movie felt like a setup for another movie. Characters are
introduced, stuff happens, but nothing really matters, at best it
hints, that there COULD be happening something in the future.

Another big problem I had though, was the lack of 'magic moments' and
thrilling action, like in the first flick (I still get goosebumps,
thinking about how Tony Stark flew in his suit for the first time).
Everything just runs too smooth, there is almost no tension, you never
think anything could harm Tony Stark, you never feel something bad is
about to happen. If I compare this with the incredible Dark Knight, it
feels like a kids movie, something like the ranks of Sky High. Plus,
there was just to little Iron Man in Iron Man, to little I care about.
Iron Man 2 was made to prepare us for The Avengers and Thor, but by
being that, it kinda forgot to be something in it's own. That's the
biggest difference to the first flick, who was original, fresh and
smart.

Sounds pretty much like a bash, but all that being said, I was fairly
entertained. The performances of the main characters each were pretty
good. The cast was perfect. Of course all the special effects are
amazing, with a lot attention to detail. I loved all the 'augmented
reality" stuff going on in Starks garage. The movie is funny (actually
it felt more like a comedy than an action flick) and when the action
happens, it's looking great. The biggest let down is the potential this
movie and most and for all the characters had, which wasn't used.
However this is only the review of someone who's fairly unfamiliar with
the graphic novel.

TagsUSA
I Love You Too
The Housemaid