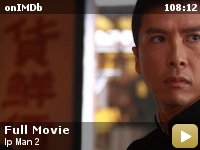 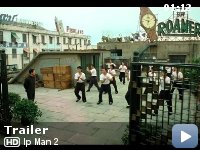 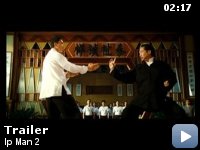 Centering on Ip Man's migration to Hong Kong in 1949 as he attempts to propagate his discipline of Wing Chun martial arts.

Storyline
Ip Man 2 is a 2010 Hong Kong biographical martial arts film loosely based on the life of Ip Man, a grandmaster of the martial art Wing Chun. A sequel to the 2008 film Ip Man, the film was directed by Wilson Yip, and stars Donnie Yen, who reprises the leading role. Continuing after the events of the earlier film, the sequel centers on Ip's movements in Hong Kong, which is under British colonial rule. He attempts to propagate his discipline of Wing Chun, but faces rivalry from other practitioners, including the local master of Hung Ga martial arts.

Darren Shahlavi who costars as Twister in the film, has been a fan of Hong Kong cinema since a boy and even attended a seminar for film fighting by Donnie Yen 20 years ago in London, England.

Incredible action, but doesn't have the heart of the original film


Ip Man might just be my favorite martial arts film of all time. It's
the only martial arts film I've ever given a perfect score and that's
mainly due to the film having an intriguing storyline that compliments
its jaw dropping action sequences. The only flaws the film really
seemed to have was that it eventually had to end and basically left its
audience wanting more. That's where the desire for a sequel came in.

While Ip Man 2 was able to establish the same atmosphere of the
original film, it wasn't quite able to capture your heart the way like
the first film did. That's mainly because the story isn't as
enthralling. Ip Man is attempting to teach Wing Chun in Hong Kong where
he has to deal with defeating all of the masters in the area if he
wishes to teach kung-fu there. On top of that, Yip Man has to deal with
a champion western boxer who doesn't respect Chinese boxing. The
struggle to show the world that Wing Chun is a respectable martial art
seems to take a back seat to less important plot points, which makes
the sequel feel weaker than its counterpart.

However, Ip Man 2 still delivers a solid and entertaining action film.
Any scene in the film featuring Sammo Hung is gold. In fact, the sole
reason to see Ip Man 2 is for Hung's match with Donnie Yen. If you've
seen S.P.L.: Killzone, then you already have an idea of how epic a
match between these two can be. After viewing Ip Man 2, the Hung/Yen
match will be the thing viewers remember most and for good reason.

Ip Man 2 doesn't sweep you off your feet and smack you in the face
quite as hard as its predecessor, but it's still very worthy of
carrying the 'Ip Man' name and a joy to watch. If you enjoyed the
hard-hitting action of the original film, then you'll have no problem
being entertained by this sequel.

TagsEngland London
The Losers
A Nightmare on Elm Street