In a Better World 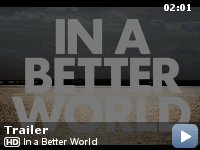 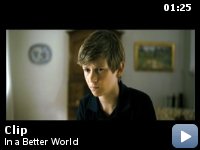 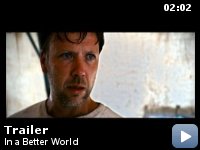 The lives of two Danish families cross each other, and an extraordinary but risky friendship comes into bud. But loneliness, frailty and sorrow lie in wait.

Storyline
Anton is a doctor who commutes between his home in an idyllic town in Denmark, and his work at an African refugee camp. In these two very different worlds, he and his family are faced with conflicts that lead them to difficult choices between revenge and forgiveness. Anton and his wife Marianne, who have two young sons, are separated and struggling with the possibility of divorce. Their older, ten-year-old son Elias is being bullied at school, until he is defended by Christian, a new boy who has just moved from London with his father, Claus. Christian's mother recently lost her battle with cancer, and Christian is greatly troubled by her death. Elias and Christian quickly form a strong bond, but when Christian involves Elias in a dangerous act of revenge with potentially tragic consequences, their friendship is tested and lives are put in danger. Ultimately, it is their parents who are left to help them come to terms with the complexity of human emotions, pain and empathy.

Director Susanne Bier's fourth collaboration with screenwriter Anders Thomas Jensen (following
Open Hearts,
Brothers and
After the Wedding), and the third time she has cast Ulrich Thomsen (after
Sekten and
Brothers).

Continuity:
In the first minutes of the movie, the white T-Shirt that Anton (Mikael Persbrandt) is wearing during the surgery of the little girl gets blood stained. When finished and outside the tent, the stain is much smaller and misplaced. When leaving on the small truck, the blood stain has moved once more.


Saw this in Toronto and it remained with me for days afterward.
Shattering filmmaking! The size and elegance of a Hollywood big budget,
with the honesty and challenge of an indy. The performances, especially
those of the two boys, are riveting, but I was also impressed with the
deep focus photography, the haunting score. Went to see this because I
had so enjoyed After the Wedding – but feel this is even better. Only
the ending conflict resolution is, perhaps, a little too easy– but not
unearned. And oh boy, was I grateful for it. I want to see this with my
son, because I want him to experience the moral and emotional snake pit
Bier and her screenwriter toss us into: every guy –no matter what
age– will get it, and none of us will like it very much. To me, Bier
speaks about what it SHOULD mean to be a man. Is vengeance built into
our genes? I hope not. And I hope this wins the Academy Award this
year, and everybody in America goes to see it.

TagsDenmark London
What If…
Howl