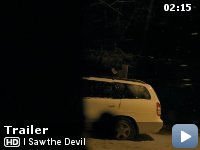 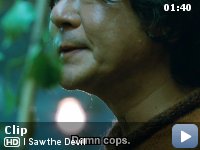 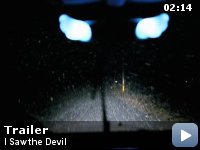 When his pregnant fiancee becomes the latest victim of a serial killer, a secret agent blurs the line between good and evil in his pursuit of revenge.

Storyline
Kyung-chul (Choi Min-sik) is a dangerous psychopath who kills for pleasure. He has committed infernal serial murders in diabolic ways that one cannot even imagine and his victims range from young women to even children. The police have chased him for a long time, but were unable to catch him. One day, Joo-yeon, daughter of a retired police chief becomes his prey and is found dead in a horrific state. Her fiance Soo-hyun (Lee Byung-hun), a top secret agent, decides to track down the murderer himself. He promises himself that he will do everything in his power to take bloody vengeance against the killer, even if it means that he must become a monster himself to get this monstrous and inhumane killer.

The Korea Media Rating Board forced Kim to recut the film for its theatrical release, objecting to its violent content. Otherwise, the film would have gotten a "Restricted" rating, preventing any sort of release in theaters or on home video.


Whenever I see a negative review of "I Saw the Devil", the critic
always mentions (scornfully) that the movie is ultra violent and
portrays women in horrifying circumstances. Yes it is, and yes it does.

But this isn't a Hollywood slasher flick. The kills in this movie are
not gratifying and aren't meant to be. The women being killed are not
scantily clad models running through forests from men wearing masks.
There is nothing pleasant or "cool" about these scenes; they make the
viewer uncomfortable, they unsettle, they bring one's mind into very
dark places. It gives us a peek into the madness that every man is
capable of, and does so realistically and without pulling its punches.
This brutal realism makes people uncomfortable, and prompts negative
reviews. This is understandable, but unfortunate. I believe that a
movie should be judged on more than the amount of blood the viewer is
comfortable seeing on-screen. To these people, please, do not watch
Korean revenge thrillers if you are uncomfortable with torture or
blood.

But enough of that rambling. This movie is excellent. Beautiful
cinematography contrasts the stark, dimly lit scenes where the murders,
or gritty fight scenes, occur. The camera work is simple but effective;
the viewer is often treated to close-ups of both Byung-hun Lee and
Mik-sik Choi, and their facial expressions tell us more than dialogue
ever could. There is also contrast between Lee and Choi. Lee, clean and
stoic, and Choi, filthy and madly expressive. They compliment each
other very well, and play off of each others strengths effectively.

The story itself is typical of revenge films, but fantastic in its
execution. Lee's character experiences a profound loss at the hands of
Choi's character, and in the process of seeking revenge begins to
resemble the man he so hates. The line between "victim" and "aggressor"
becomes blurred between both characters. This is where the film shines.
There is no black and white in "I Saw the Devil"; the viewer is left
with shades of grey.

As for the acting, it was all done very well. As I mentioned, Lee and
Choi work well together, and all supporting cast members did an
excellent job. Choi portrays his character in an incredibly convincing
manner, shifting suddenly from calmness to manic anger, but never in a
way that feels unnatural or forced. Lee's character is quiet and much
less expressive, but he does very well in showing immense amounts of
emotion through just his eyes or subtle movements of his body. A
memorable performance from them both.

As for flaws, the only thing I can think of is the strange, perhaps
unrealistic behaviour of the police. Lee is a member of the NIS, and is
very skilled when it comes to remaining hidden, but that shouldn't make
him untouchable when directly provoking police officers or driving on
the wrong side of the street. Still, though, it's a very trivial
complaint that isn't worth a deducted point.

A confident 10/10 from me. If you are comfortable seeing serial murder
portrayed realistically, and are able to appreciate more than just
gore, please, do yourself a favour and watch this film.