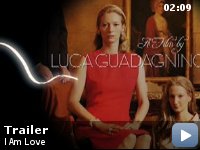 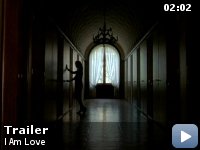 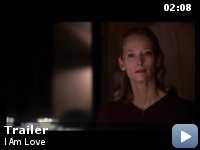 A tragic love story set at the turn of the millennium in Milan. The film follows the fall of the haute bourgeoisie due to the forces of passion and unconditional love.

Storyline
Over two decades ago, Emma left Russia to follow Tancredi Recchi, the man who had proposed to her. Now a member of a powerful industrial Milanese family, she is the respected mother of three. But Emma, although not unhappy, feels confusedly unfulfilled. One day Antonio, a talented chef and her son's friend and partner, makes her senses kindle. It does not take long before she embarks on a passionate affair with the sensuous young man.

Continuity:
When Edoardo and Elisabetta meet in London, there's a lot of shadow on the pavement. When they walk away together in the next shot, there's a lot more sun.


I can't describe the power of this film, and I can't stop thinking
about it either. There's a negative review on here that says to go see
MICHAEL CLAYTON instead and not to waste your time. Well, if a movie
about plot, overly drawn characters and artifice, all shot by the book,
is what you're looking for, then yes… this probably isn't the movie
for you.

But if you like people more than stories. If you want to see
film-making at its most graceful and organic and inventive, if you want
a musical score that will turn a sidelong glance into an operatic
overture, then this IS the movie for you. It is a baroque masterwork. A
cathedral of a film. Cold as stone but inspiring the soul.

Tilda Swinton is a goddess. She says so little, but communicates so
much. There's an entire ocean of emotion inside or her, spilling out of
her eyes. I cried twice at this film. Once because of the subject
matter and then again at the delicacy of the film-making. Don't let
people with conservative tastes and conventional ideas of film and
story tell you not to go see this movie. They are robbing you of
experiencing pure emotive cinema.