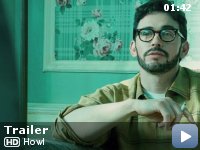 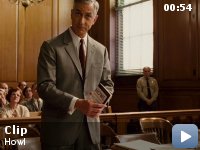 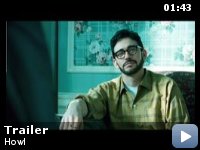 As Allen Ginsberg talks about his life and art, his most famous poem is illustrated in animation while the obscenity trial of the work is dramatized.

Storyline
It's San Francisco in 1957, and an American masterpiece is put on trial. Howl, the film, recounts this dark moment using three interwoven threads: the tumultuous life events that led a young Allen Ginsberg to find his true voice as an artist, society's reaction (the obscenity trial), and animation that echoes the poem's surreal style. All three coalesce in hybrid that dramatizes the birth of a counterculture.

Taglines:
The Obscenity Trial That Started a Revolution. The Poem That Rocked a Generation.


Watched in June 2010 I've never read Howl or really have had much
interest in Allen Ginsberg, but having seen this delight of a film,
things have changed.

The film takes a look at several key moments in Ginsbergs life. In B&W
we see Ginsberg recite his poem Howl: there are also insights into his
friendships with Jack Kerouac, Neal Cassady and his relationship with
Peter Orlovsky. The reading of the poem is segmented throughout the
film and in between these segments we see Ginsberg being interviewed,
whilst we never see the interviewer, we do see Ginsberg talk about his
life. The other main element is the trial of Howl, which was deemed
obscene. All these aspects combine well and it never feels disjointed;
they are nicely contrasted and offer great insights into the life of
Ginsberg.

Add to this some wonderful animation that plays during much of the
recital of Howl; it creates something of a reality to the poem and made
it even more stunning and graphic and tragic and beautiful. The trial
scenes are fascinating with the constant questioning by the prosecution
as to what certain lines or words meant. And how wonderful the judge,
who seemed to have made his decision well before the trial was over.
Thank goodness for him.

James Franco plays Ginsberg and does so well, although he doesn't have
too much to do, he is mostly either being interviewed or reciting; but
it is in this he impresses, the passion, the intensity of the piece
shines through: the ending of Howl, known as 'Footnote to Howl' is
brilliantly spoken and I found it hugely emotional. The film has a
slight doco feel to it at times, but it is otherwise an absorbing and
wonderfully told account.

TagsUSA
In a Better World
Beatdown