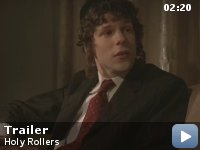 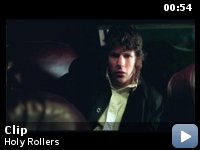 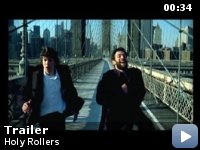 In Brooklyn, a youth from an Orthodox Jewish community is lured into becoming an Ecstasy dealer by his pal who has ties to an Israel drug cartel.

Storyline
Inspired by a true story of a young Hasidic man who was lured into the world of international drug trafficking in the late 90s.

Taglines:
In 1998, 1 million ecstasy pills were smuggled into the USA by a group of Hasidic Jews.

The term "holy roller" doesn't have a French equivalent or logical translation, so the film was released in France with the English title "Jewish Connection."

Anachronisms:
The bottle of perfume Rachel hands Sam to give to his mom is Calvin Klein Euphoria, which was not released until 2007.

I'm not sure how close Holy Rollers comes to the actual events that
it's based on, but it's an interesting flick. It really doesn't do much
more than the many movies that chronicle the rise and fall of a drug
dealer that came before, if I'm being honest. You have your innocent
young man who's seduced and corrupted by the (seemingly) easy money of
drugs (ecstacy, in this instance), that he's introduced to by a shady
friend, and most of the consequences play out in exactly the way you
would expect them to and have seen before. But the setting among the
Hasidic Jew community of New York gives the movie a unique spin that
(at least for me) made it something other than the cookie-cutter story
it could have been.


Jesse Eisenberg was totally believable as the initially pure-hearted
main character whose desire to make more money leads him away from his
family and the life he values. It was a good role for him, but it
didn't really require him to stretch beyond his characters in
Adventureland or Zombieland. Which isn't to say that he's not good
here, he just gives a very familiar performance. I hear he plays a very
different character than his usual in The Social Network, though, so
hopefully my fears of him being forever bound by one particular
character type are unfounded.

Ari Graynor was the reason why I initially wanted to see the movie
(big-time fan, the girl great), but I have to admit that her character
was pretty one-dimensional and didn't really give her much to work
with. The same goes for Justin Bartha's character and most of the
others in the movie: they're not really written as whole people.
They're given one or two qualities and everything they do stems exactly
from their total greed, purity, etc. It would have been nice to see
some more "complete" characters, but that's my only real complaint
about the film.

I liked the documentary-like quality of the camera work; if almost made
it seem like I was watching the movie unfold in real-time. And as I
said before, the setting and context the story plays out in was Holy
Rollers' biggest strength, in my opinion. How much you enjoy it will
depend largely on how much interest you still have in these kinds of
stories, as it admittedly doesn't rise out the familiar trappings and
scenarios of similar movies. I still found it to be pretty
entertaining, though.