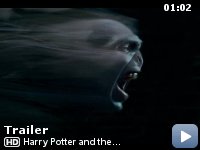 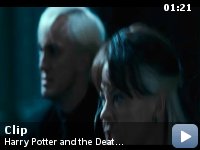 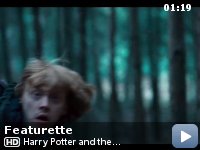 As Harry races against time and evil to destroy the Horcruxes, he uncovers the existence of three most powerful objects in the wizarding world: the Deathly Hallows.

Storyline
Voldemort's power is growing stronger. He now has control over the Ministry of Magic and Hogwarts. Harry, Ron, and Hermione decide to finish Dumbledore's work and find the rest of the Horcruxes to defeat the Dark Lord. But little hope remains for the Trio, and the rest of the Wizarding World, so everything they do must go as planned.

Taglines:
Part 1 Of The Epic Finale

Linguist expert Dr. Francis Nolan devised the Parseltongue language for this and the other Harry Potter films which feature the serpent speak.

Continuity:
The piece of paper on which Xenophilius Lovegood draws the Hallows symbol changes between shots. When he is drawing the symbols there is a smudge on the paper, but when the shot pans away and he is talking to Harry, there is no smudge on the paper.

Rufus Scrimgeour:
These are dark times, there is no denying. Our world has perhaps faced no greater threat than it does today. But I say this to our citizenry: We, ever your servants, will continue to defend your liberty and repel the forces that seek to take it from you! Your Ministry remains, strong.

Wickedly awesome – One of the best


Up until now, I was convinced that from the 4th book onwards, Harry
Potter-books had become too complex to make into film: Goblet of Fire
was a sore disappointment. Order of the Phoenix left many Potterheads
wanting more, even if it wasn't a bad film per se (personally I
thoroughly enjoyed it, even though I felt they left out too much).
Half-blood Prince -while visually stunning- did not capture the
brilliance of the book. With "Harry Potter and the Deathly Hallows", I
think the makers have finally succeeded in crafting a movie that was
both fun to watch for casual viewers while also catering to the needs
of the hard-core fans who know the books by heart. The decision to
split the movie into two parts may be judged as a financial one by
some, but I'm convinced it was the only possible way to make this work.
The movie was cut off at the perfect time as well, having the viewers
yearn for more without being too abrupt.


I don't want to give away anything, so I'll just say this: Hats of to
you, David Yates. One can only hope the second installment will
continue in the same vein…