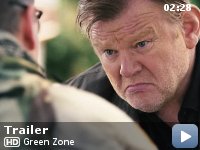 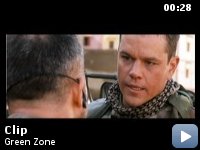 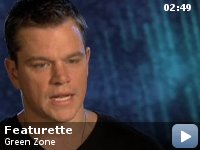 Discovering covert and faulty intelligence causes a U.S. Army officer to go rogue as he hunts for Weapons of Mass Destruction in an unstable region.

Storyline
Following the American invasion of Iraq in 2003 Chief Warrant Officer Roy Miller and his men are charged with finding the so-called weapons of mass destruction, whose existence justified American involvement, according to the Pentagon and their man in Baghdad, Poundstone. Veteran CIA operative Marty tells Miller that there are no weapons, it is a deception to allow the Americans to take over the country and install a puppet leader. Also suspicious of Poundstone is Wall Street Journal reporter Lawrie Dayne, who lets slip to Miller that Poundstone told her he had secret talks in Jordan with an important Iraqi, code-named Magellan, who told him about the weapons, though it now seems likely Magellan's true information was to the contrary. So begins a hunt for the truth. Who's playing whom?

The traffic shots of the American convoy rolling under an overpass and encountering a traffic jam as panicked crowds flee Baghdad were shot in Spain, on a brand new highway which was not yet open to the public.

Continuity:
After President Bush is seen making the announcement on TV, a blonde woman in a green/blue shirt is seen stood up, clapping. In the very next shot, the same woman is seen sat down, talking excitedly to people at her table.

Al Rawi Bodyguard:
[chaos in the hallways]
Downstairs everyone!

Al Rawi Bodyguard:
Ayad, get in the car. I'm right behind you.
[leaving the building]


Green Zone is the latest Iraq War inspired motion picture. I wasn't
expecting much and ended up being pleasantly surprised. It's a fast
paced and riveting ride from the get-go. The war being fought in the
film is more between the Pentagon and the CIA than the US v Iraq which
makes it all the more interesting and the film allows you to see things
from Iraq's perspective for a change. The premise set up in the film
regarding the 'Intelligence' regarding Weapons of Mass Destruction used
to justify the invasion is entirely believable. Matt Damon is well
suited to his part as a unit leader Roy Miller, as is Brendan Gleeson
as the CIA man and Greg Kinnear is refreshingly nasty as Poundstone
from the Pentagon – all turn in good performances. Shot on location in
Morocco, Spain and in England I could have sworn we were in Bagdad the
whole time – settings are very convincing. Yes, there is too much hand-
held camera movement that quickly brought on discomfort followed by a
headache but that is my only negative and as the film doesn't outstay
its welcome I'm willing to concede the shakiness probably lends an
'embedded' realism. Is any of the plot or characters based on real
events or people? I have no idea other than learning the film is based
on the 2006 non-fiction book 'Imperial Life in the Emerald City' by
Rajiv Chandrasekaran, a journalist for The Washington Post. I haven't
read the book so I can't comment on how closely the film follows it. I
spent a few moments of the film wondering about the story's
authenticity but as a piece of cinema entertainment in its own right
Green Zone gets the green light from me.

TagsIraqJordanSpain
The Round Up
Heartbreaker