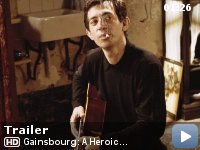 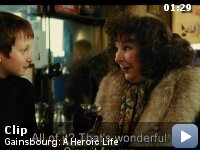 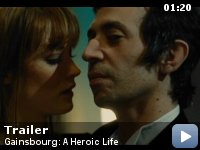 A glimpse at the life of French singer Serge Gainsbourg, from growing up in 1940s Nazi-occupied Paris through his successful song-writing years in the 1960s to his death in 1991 at the age of 62.

Storyline
A glimpse at the life of French singer Serge Gainsbourg, from growing up in 1940s Nazi-occupied Paris through his successful song-writing years in the 1960s to his death in 1991 at the age of 62.

Lucy Gordon died when the film was in post production. This film is dedicated to her memory.

Anachronisms:
In the 135 minute version of the film a nightclub reveler laughs about Gainsbourg being parodied on 'Guignols de l'info' (a French puppet show in which celebrities are mocked) but in the same scene Gainsbourg meets Bambou for the first time (his last wife). He married Bambou in 1981 but the Guignols were only created in 1988.

Lucien Ginsburg:
Can I put your hand in mine?

It's not big or clever to smoke, and it doesn't make you look cool … unless you happen to be Serge Gainsbourg … !


GAINSBOURG (Vie héroïque) … from the Studio Canal stable depicts the
life story of Serge Gainsbourg from early childhood in the 1930's and
40's, until just before his death in 1991.

Born Lucien Ginsburg – and as an impressionable youth he felt outcast
as being a Jewish child in Nazi occupied Paris in the 1940's – leading
him to develop an imaginary friend who adopted an increasingly
grotesque caricature / persona of himself that would lead him on to do
more and more outrageous things to "rebel" his situation and to attempt
to gain an element of "love" and "acceptance" from his notoriety.

A talented musician and artist, Lucien (who later was persuaded by
friends to change his name to the more "acceptable" Serge Gainsbourg)
became the darling of the social scene, charming his way through a
succession of affairs with beautiful women – most notably Brigitte
Bardot, Juliette Greco, and Jane Birkin.

I'm surprised that they didn't have a cigarette company sponsoring this
movie – as the sheer amount of fags smoked during this film must be
some sort of record!

After the showing of the film (at the Cineworld, Haymarket, London) we
were treated to a Question and Answer session with the Writer /
Director of this movie JOANN SFAR, who explained that the idea for the
film came from his own graphic novel on Serge Gainsbourg penned by
JOANN SFAR – and this pretty much formed the construct and ambiance of
the movie – it is highly graphical and visual in it's content – much of
it being fantasy visions and flashbacks within Gainsbourg's mind.
Talking from the heart – Joann showed a real passion for the film, and
was very open as to how the film was created.

Gainsbourg became the darling of French society with his talent and
flair – but he also would court scandal and became infamous for the
release of "Je t'aime… moi non plus" (which he originally wrote for
Bardot) and the seemingly disrespectful reggae version of the French
national anthem "La Marseillaise", but love him or loath him – you
couldn't ignore him ..

The whole movie is very atmospheric, and some of the casting of this
film was inspired – especially the terrific performances by Eric
Elmosnini in the title role, the stunning beautiful Laetitia Casta as
Brigitte Bardot, Lucy Gordon as Jane Birkin, Anna Mouglalis as Juliette
Greco and Kacey Mottet Klein as the young Lucien Ginsburg.

At the end credits of the film is a dedication "to Lucy" which referred
to the actress Lucy Gordon – who (the director explained) played the
part of Jane Birkin in the film – and who had tragically committed
suicide during the final editing parts of the film – a talented actress
– and a sad loss.

At 2 hours 10mins long, in French with English subtitles GAINSBOURG
will not be everyone's cup of tea … but the film DOES keep you
entertained and if you give it a chance, I'm sure that you will not be
disappointed …

It's not big or clever to smoke, and it doesn't make you look cool …
unless you happen to be Serge Gainsbourg … !

GAINSBOURG is on general release from 30th July 2010