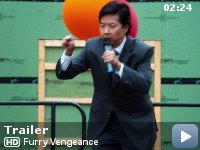 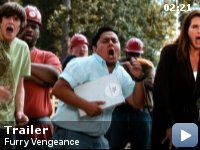 Storyline
Hoping to make enough money through an overseas employer to live comfortably, Real Estate Developer Dan Sanders manages to convince his son, Tyler, and wife, Tammy, to re-locate in a remote corner of Oregon. Tyler does seem content after he meets with lovely Amber, but Tammy is concerned about her husband when he near-hysterically claims that local creatures, including beavers, ravens, bears, fox, etc. have joined forces to sabotage his project.

Taglines:
He came. He saw. They conquered.

Steve Carell and Jeremy Piven were both attached to play the lead role at various times before Brendan Fraser was eventually cast.

Errors in geography:
this movie takes place in Oregon, but in one scene Brendan Fraser's character is seen holding Byrne dairy milk, which is a family owned upstate NY dairy.

Brendan Fraser has uprooted wife Brooke Shields and their teenage son
to some unspecified rural area, where he's overseeing the construction
of a McMansion community in a formerly pristine natural area. This
angers the local wildlife, headed by a cackling raccoon, who set off to
humiliate, injure, and presumably kill Fraser and other human
interlopers.

Now, I'm all for the stupidly funny. I wasn't expecting Oscar material
and certainly didn't expect it from this. But even on its own low
terms, this movie just fails to be funny, and in my eyes, there's
little worse than a bad comedy. Bad efforts at other genres can be
great for laughs, but when comedies fail to elicit laughs, they're just
painful and dull.

Fraser's goofy amiability has levitated other films before, but this
time he's just not up to it. There's too much bottom-of-the-barrel
slapstick, an overpopulation of stupid characters, and predictable
family drama. Also, frequently weirdly inconsistent. At one point
Fraser is flung into a bee's nest and is covered with stings, but the
next morning he's shown without a scratch or swelling on him. Early on,
another character suffers an animal-induced auto accident that's rather
appalling since it would be clearly fatal and later we're told the
character "disappeared." There quite a bit of wet-crotch and
groin-injury humor; I remember a time when that was considered too
risqué for children, and now is standard for kid flicks. At any rate,
they're cheap laughs.

Fraser looks bad; he's gained weight and looks pudgy and uncomfortable.
Brooke Shields can be a great comic actress but spends most of the time
playing the straight man, so her talents are underused. She also
doesn't look her best, either. They're basically playing second fiddle
to the cutesy animals, which range from real animals to poorly-done CGI
stand-ins. Also has nocturnal animals, like owls and raccoons, running
around in the day, and daytime animals, like crows, active at night.
Not to mention seagulls suddenly showing up in a clearly inland and
mountainous locale. At one point the flick attempts to set up some sort
of mystical/magical reasoning for the intelligent animals (who not only
understand human speech, but seem every bit as aware of human pop
culture as the humans are), but then it's quickly dropped and
forgotten.

I saw this at a preview screening; there were a number of families
there and I could tell the very young found it funny, but older kids
and adults were clearly not amused and unimpressed. I guess they wanted
a sort of live-action cartoon here, but amidst all the mayhem they
forgot to make it truly funny…and contrasting it to a halfway
realistic family drama doesn't help. You're better off staying at home
with some classic Warner Brothers cartoons. FURRY VENGEANCE is to be
avoided at all costs, one of the worst things I've seen in a long time.