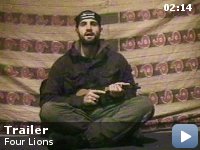 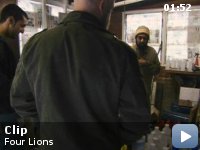 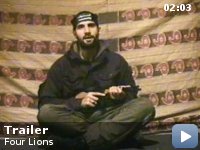 Four incompetent British jihadists set out to train for and commit an act of terror.

Storyline
Four Lions tells the story of a group of British jihadists who push their abstract dreams of glory to the breaking point. As the wheels fly off, and their competing ideologies clash, what emerges is an emotionally engaging (and entirely plausible) farce. In a storm of razor-sharp verbal jousting and large-scale set pieces, Four Lions is a comic tour de force; it shows that-while terrorism is about ideology-it can also be about idiots.

According to Christopher Morris, Barry, the Jihadist group leader, was based on a former BNP member who in an attempt to out-knowledge the Asian youths he regularly assaulted, studied the Qur'an and as a result "accidentally converted himself" and became a Muslim.

Revealing mistakes:
When Barry is driving the group to the airport in his Citroen Xantia, he pulls over in a huff and swallows the key to stop them going. However, the key he produces and swallows is a Ford key, not a Citroen key. Additionally, the car is fitted as standard with a keypad immobiliser, requiring a security number to start – so Omar's attempt to hotwire the car would not have succeeded in real life.

Sniper:
We got the bear.

Sniper:
[into walkie-talkie]
Is a Wookie a bear, Control?


The film can be approached from two angles; as a comedy and as an
important contemporary cultural text. As a comedy it succeeded beyond
expectations. Part of the pleasure surely came from the spectacle of
the event; a sold out screening with cast and crew present along with
regional cultural references that resonated infectiously with many in
the audience, but this can take nothing away from the many levels of
comedy at work within this film. There were elements of overacted
screwball comedy; there were underplayed facial expressions and
reactions that added a wealth of character and personality to the
comedy; further still, there were elaborately constructed situational
set pieces. All these elements along with explosively dynamic dialogue
that was well delivered combined to send the audience into tears of
laughter.

In a separate issue to the comedy there was the cultural commentary,
which is always going to draw attention when it is such a taboo subject
as Jihad: a word that is often avoided at all costs. The film
unapologetically offers a plethora of questions around motivation,
meaning and justification which it never falls into the trap of giving
patronizing, melodramatic answers to nor does it preach any solutions.

The many characters were all utilised to give different points of views
and different perspectives; the main protagonist Omar (Riz Ahmed) was
fully fleshed out, with the other characters used to offer differing
ideas and obviously the above mentioned comic relief. Omar's brother
for instance had such a minor part but raises questions around what he
considers a true following of Islam, which he promotes as peaceful, but
is then exposed as intrinsically sexist due to the way he practically
locks his wife in a cupboard. That being said, Islam itself was to a
large extent sidelined and the film much more overtly dealt with
identification and senses of belonging for a demographic that has
partial but not complete grips on the many angles of where its identity
is created; this includes Barry (Nigel Lindsay), the Caucasian convert
amongst the group.

Four Lions is easily funny enough to reach a very wide audience, where
viewers will be left without answers and therefore forced to discuss
these issues, which are too often brushed under the proverbial rug.

TagsSpain
I Love You Too
The Housemaid