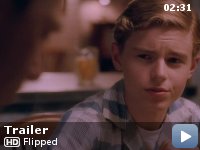 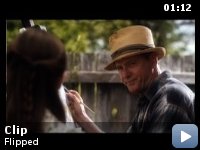 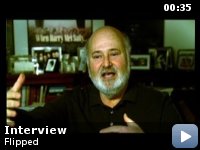 Two eighth graders start to have feelings for each other despite being total opposites. Based on the novel "Flipped" by Wendelin Van Draanen.

Storyline
Juli Baker devoutly believes in three things: the sanctity of trees (especially her beloved sycamore), the wholesomeness of the eggs she collects from her backyard flock of chickens, and that someday she will kiss Bryce Loski. Ever since she saw Bryce's baby blues back in second grade, Juli has been smitten. Unfortunately, Bryce has never felt the same. Frankly, he thinks Juli Baker is a little weird–after all, what kind of freak raises chickens and sits in trees for fun? Then, in eighth grade, everything changes. Bryce begins to see that Juli's unusual interests and pride in her family are, well, kind of cool. And Juli starts to think that maybe Bryce's brilliant blue eyes are as empty as the rest of Bryce seems to be. After all, what kind of jerk doesn't care about other people's feelings about chickens and trees? With Flipped, mystery author Wendelin Van Draanen has taken a break from her Sammy Keyes series…

Dante Basco allegedly provided a voice over work for the movie's trailer.

Juli Baker:
I guess it's something about his eyes or maybe his smile.

Richard Baker:
And what about him?

Richard Baker:
You have to look at the whole landscape.

Juli Baker:
What does that mean?

Richard Baker:
A painting is more then the sum of it's parts. A cow by itself is just A cow. A meadow by itself is just grass, flowers. And the sun picking through the trees, is just a beam of light. But you put them all together and it can be magic.


Back in 1973, an episode of "All in the Family" told the same story
from three different perspectives, one of which was from the point of
view of Mike "Meathead" Stivic, played by Rob Reiner. Watching his
latest directorial effort, I wondered if the "he said / she said"
gimmick of that episode ("Everybody Tells the Truth") was what
attracted Reiner to "Flipped," the young-adult novel by Wendelin Van
Draanen, which employs the same multi-POV technique that Lawrence
Durrell perfected with his "Alexandria Quartet" in the late 1950s. The
film version of "Flipped" shows Reiner at the top of his form, a worthy
addition to an ouevre that includes such classics as "This Is Spinal
Tap," "Misery," "When Harry Met Sally" and "Stand By Me," the 1986
period piece that "Flipped" most recalls, with its younger characters
and coming-of-age theme. At the heart of "Flipped" is Juli Baker
(Madeline Carroll), a smart, pretty and thoughtful girl who you just
can't help losing your heart to. Juli herself flips for Bryce Loski,
who is at first repelled by Juli and then slowly starts to see her for
the lovely person she is. The cast is augmented by such pros as John
Mahoney (Frasier's dad on "Cheers"), Anthony Edwards, Aidan Quinn and
Rebecca De Mornay and Penelope Ann Miller. The film offers up various
slices of life from the late '50s and early '60s that makes for a
nostalgic, romantic and very moving film. Special kudos to the
filmmakers for finding a girl to play young Juli (Morgan Lily) who
looks chillingly like Madeline Carroll; I would have bet anything the
two were sisters. For those who are bored by the dumb-dumb summer
comedies of 2010 ("The Other Guys," "Dinner for Schmucks") and the
special-effects hijinks of "Inception," this is a tender and
emotionally satisfying journey that will stay with you for years.