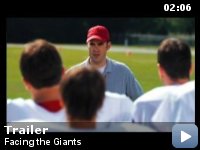 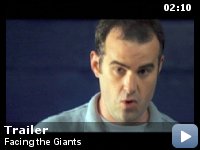 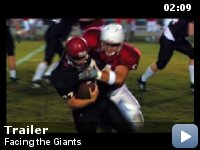 A losing coach with an underdog football team faces their giants of fear and failure on and off the field to surprising results.

Storyline
An action-packed drama about a Christian high school football coach who uses his undying faith to battle the giants of fear and failure. In six years of coaching, Grant Taylor has never led his Shiloh Eagles to a winning season. After learning that he and his wife Brooke face infertility, Grant discovers that a group of fathers are secretly organizing to have him dismissed as head coach. Devastated by his circumstances, he cries out to God in desperation. When Grant receives a message from an unexpected visitor, he searches for a stronger purpose for his football team. He dares to challenge his players to believe God for the impossible on and off the field. When faced with unbelievable odds, the Eagles must step up to their greatest test of strength and courage. What transpires is a dynamic story of the fight between faith and fear.

Taglines:
…With God, all things are possible…

Any profits received by the church from this movie will be used to build a youth center in Albany, Georgia.

Miscellaneous:
The shadows on the title sequence are backwards. If the letters in the name "Facing the Giants" were truly back-lit by the lights in the stadium, the shadows would be upside-down, not right-side up.

Brooke Taylor:
Grant, we gotta do something about the car. The only thing it does faithfully for us is break down.

a little movie with a lot of heart


The movie was well worth my time. I would encourage anyone who is
looking for a good uplifting movie to check this one out. the
characters are easy to relate to and the underlying story is very
heartwarming. If you are having a bad day, or even if you are having a
good day, this would be a great film. I left the movie feeling uplifted
and full of hope!! The spirit of the movie is a bit reminiscent of "Pay
It Forward". One word of warning, although the film does make you laugh
in parts, you will need to bring your own box of tissues. After
watching the film, I found out that the film was shot with only 1
camera. I honestly did not notice while watching the movie. everyone
should be able to find a part of themselves in at least one of the main
characters.