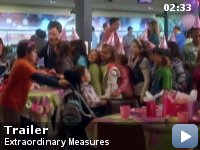 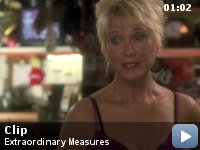 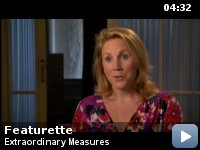 A drama centered on the efforts of John and Aileen Crowley to find a researcher who might have a cure for their two children's rare genetic disorder.

Storyline
A Portland couple have two children with Pompe disease, a genetic anomaly that kills most before a child's tenth birthday. The husband, John, an advertising executive, contacts Robert Stonehill, a researcher in Nebraska who has done innovative research for an enzyme treatment. He has little money to fund his laboratory, and a thorny personality that drives away colleagues and funders. John and his wife Aileen raise money to help Stonehill's research and the required clinical trials. John takes on the task full time, working with venture capitalists and then rival teams of researchers. Time is running short, Stonehill's angry outburst hinder the company's faith in him, and the profit motive may upend John's hopes. The researchers race against time for the children who have the disease.

Taglines:
Don't hope for a miracle. Make one.

P.J. Byrne, who plays Dr. Preston, has a cousin in real life that is treating the Crowley children at St. Peter's University Hospital in New Jersey.

Continuity:
When Patrick Crowley is throwing food to ducks at the lake, he laughs and reveals that he is missing two milky central incisors. At the end of the movie when he is in the hospital taking his medicine, he laughs again revealing that he is missing only one milky central incisor instead of two – the last scene of the movie was filmed before the first.

John Crowley:
[affably]
Well, thank you very much for firing me.

Dr. Kent Webber:
My pleasure, I never liked you.


The faceplate reviewer goes out of his way to pan the leads, Harrison
Ford and Brendan Fraser as being too old, curmudgeonly and too fat and
weepy. OK. Thanks for expressing those opinions, which, BTW, I don't
share. Yes. There's no doubt this is a sentimental flick with great
emotional overtones and certainly qualifies as a three hanky job.
Seeing children suffer, whether they're cute, charming, cuddly or not,
is not pleasant. But, the fact that there are these kinds of kids who
endure the ravages of disease stemming from their own bodies is a sad
reality and I would argue it takes a pretty stern person to consider
these conditions unemotionally. The movie is based on a book and like
any biopic, a certain amount of license is taken in bringing the story
to the screen. However, the story is never maudlin. The script is full
of sentiment but never slips down to the level of being overly
sentimental. In effect, it's a tale of people with various agendas
driven by the desperation of a father trying to help his children from
dying an early death. There is no deus ex machina, here. The conflicts
which impede the goal largely stem from the personal agendas of the
players in the drama. Sound familiar? You bet. That's what good writing
is all about and when life imitates myth, it's even better. This is a
good movie. Go see it. And, if you do so without puddling up at the
eyeballs, you're made of sterner stuff than me.

TagsUSA
Gainsbourg: A Heroic Life
The Day the Music Died