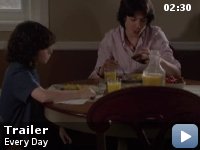 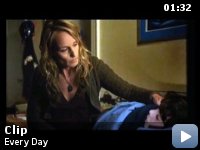 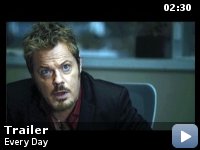 A comedy about a New York City couple (Schreiber and Hunt) in romantic crisis.

Storyline
This day really isn't all that different than every other day. Except today, Ned's gay son Jonah wants to go to a college party, his wife is bringing home their elderly father to live with them, and his outrageous boss seems to have become even more crazy and demanding than would even seem possible. As his wife tries to take care of her father reconnect with him, Ned tries to reconnect with Jonah, and then without trying, he seems to have formed a connection with his co-worker. If he can get through days like these, he should be able to get through anything else life throws at him.

Taglines:
Not quite the party you signed up for…

Garrett:
[to Ned]
You're not nearly as boring as you pretend to be.

"Every Day" is a dramedy about life in the middle of a midlife crisis.


"Every Day" tells the tale of a couple going through a midlife crisis.
Ned (Liev Schreiber), is a man on the brink of a mental breakdown. You
see life isn't easy for Ned as he is dealing with a boat load of
problems. He is bored with his screen writing job, he is dealing with
trying to accept that his son Jonah (Ezra Miller) is gay, and on top of
all this his marriage is falling apart. His wife Jeannie (Helen Hunt)
has her own issues as she is responsible for taking care of her father
Ernie (Brian Dennehy) who is dying and trying to save her marriage with
her husband Ned who doesn't seem to give her the time of day. Life
isn't easy for Ned and Jeannie but what happens in "Every Day" is an
interesting look on the subject of marriage and life in general.

I saw "Every Day" at the "World Premiere" screening at the Tribeca Film
Festival on Saturday April 24, 2010. I basically went into this film
knowing nothing about it other than the fact that it starred Helen
Hunt, Carla Gugino, and Liev Schreiber all of which are solid actors.
What I got out of the film was an interesting look at life and marriage
written by a man named Richard Levine, who is a first time screen
writer and director.

One of my favorite things about the film was the whole workplace
scenario that Ned was placed in. This subplot to me proved to be
realistic. This was one of those films where I felt it did a good job
capturing how too much work can destroy your life outside of work. It
also shows that life as an adult isn't easy and is a balancing act with
everything that gets thrown your way. The subjects of marriage, having
children, having a sick parent, cheating, working too much, and a few
other subjects all get looked at in the film.

My problem however with the film was that I wasn't sure what was going
on in the end of the film. It felt like the movie had a conclusion but
it really didn't. I guess the film had one of those "life happens"
endings. The subject matter of cheating was never really talked about,
which bothered me because it seemed to be one of the key focuses of the
film. While the film itself felt real like these characters exist in
the real world something about how everything ended did not. I can't
really explain it but its just something that blurred the line of
fiction and reality. I like that aspect of it and I didn't at the same
time.

The characters were all good as well as the development of them. Liev
Schreiber did a great job in the lead role. I really felt his struggles
as a parent and as a married man to devote his time to the right
people. Helen Hunt does a good job as well dealing with her marriage
and with her father's obsession with wanting to die. Brian Dennehy
performance is solid but that's no surprise because he has been a solid
actor for many years now. You really did however feel for what he was
going through. Carla Gugino makes a nice supporting role appearance
here, playing the sexy "screen writer" with her eye on Ned. Carla's
role really isn't as deep as I would have liked it to be but Carla has
a knack for playing the sexy coworker role. She was perfectly cast to
play the role she played. The kids Ezra Miller and Skyler Fortgang both
do a terrific job on screen and I am sure they will have a lot more
roles coming their way in the near future.

In the end…I liked the film for what it was. It had some issues here
and there but coming from a first time writer and director that was
bound to happen. It was a valid effort and the film itself is
interesting and realistic for the most part. The acting was good and
the roles were well written. As I mentioned above, some things about
the film blurred the lines between reality and fiction. The film's
ending is its weakness in my humble opinion. Not saying that it was bad
but just didn't impress me and left me rather indifferent about what I
just watched. All in all, I would recommend it because it was a solid
film about life and the famous midlife crisis. Check it out when it
hits theaters! MovieManMenzel's final rating for "Every Day" is a 7 out
of 10.