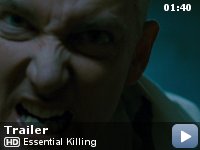 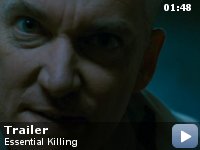 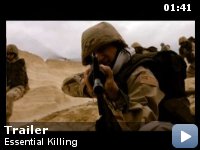 A thriller centered on a political prisoner who attempts his escape.

Storyline
A Taliban member who lives in Afghanistan is taken captive by the Americans after killing three American soldiers. He is transferred to Europe for interrogation but manages to escape from his captors and becomes an escaped convict on a continent he does not know.

Woman on a Bicycle

While some characters are named in the end credits, no names are used in the film itself.

Continuity:
After Mohammed falls in the water he climbs out of the lake. However, in the following scene with the dog he seems dry.

I just saw this while visiting Warsaw.

The plot is very simple. Two American contractors and an American
soldier inadvertently corner Gallo's character – it's not clear if he's
a local peasant, Taliban soldier, an American Taliban or something else
altogether. He grabs a weapon from a dead body and hides. When the
Americans investigate his hiding place, he let's loose, killing them
and flees and is quickly captured, interrogated, waterboarded,
processed and flown out to a 'black site' base in Eastern Europe. In a
freak accident, he manages to escape and, from that point on, it is him
against pretty much everyone and everything just trying to survive a
few more minutes at a time.


It's an enigmatic movie and, in my experience, exceptional, powerful
and poetic. A challenging film which plays strongly to subjectivity. It
encompasses elements from other chase and wilderness movies but I am
hard pressed to think of other films to directly compare it to. The
closest I could come up with was Larisa Shepitko's "The Ascent" and
perhaps elements of Jarmusch's "Dead Man". Still, it stands unique.

I'd note that opinions coming out of the theater were very divided and
to the extremes. It is clearly not for everyone, some found it
brilliant while others where quite disappointed. This may be due in
part to the current poster which does the movie several injustices; it
makes it appear a much more conventional movie than it is, does not
reflected the artistic beauty of the film itself (outstanding
cinematography – almost every frame as a still would not look out of
place in an art gallery – something even those who didn't like the film
tended to agree on), and it furthers expectations of a 'normal' action
film – notwithstanding the spectacular opening, those expecting a
Hollywood action film will be disappointed as will be horror fans – the
movie has a brutal realism but is not nearly as graphically violent as
I expected based on the trailer and reviews. It opens looking like a
big budget Hollywood movie and moves progressively further into
abstraction – reflecting the deteriorating physical, mental and
spiritual state of the protagonist.

As to the protagonist, Vincent Gallo is amazing and I can see why he
was awarded for this role at Venice. It's the strongest performance
I've seen by any actor in recent memory. His commitment to the role
being absolute, animalistic and very physical. The enigmatic quality is
furthered by his never speaking which, along with his culturally
androgynous look, leaves the question of his identity unresolved. When
he kills it is with a desperate and almost pathetic quality which makes
him come across as more human and less as a monster. The pathos he was
able to communicate with his expressions was remarkable. I'm still
stuck with the pained image of his face in a scene where he kills a
dog.

Emmanuelle Seigner was good in her part though it was quite brief. Only
a handful of characters left a clear impression as most were obscured
in darkness, shadow or only seen fleetingly. I found the ending quite
satisfying, though, again, I think some were expecting a more obvious,
melodramatic climax. Don't expect a lot of explosions.

The point of view sticks with the protagonist (we are privy to very
little beyond his perspective) but doesn't seem to judge or advocate.
Much is seen through his eyes to the point to where we are taken into
his head and hear the ringing in his ears. The shifting perspectives in
the interrogation scene was very striking and effective – visually and
audibly – sound design was very well done throughout.

It's not flattering to the Americans as depicted but I hardly saw it as
anti-American or pro-Taliban (if he is a Taliban) or even bad west vs.
good/more 'spiritual' east. It was more about the basic 'fight or
flight' animal nature of man when forced to extremes than about
religion or politics and the story could have easily functioned in
other times or locations – though the contrast of the landscapes used
was wonderful. It has tense and visceral moments but is quite
contemplative while also benefiting by much tighter editing than is
typical of art-house movies.

There are some continuity issues and those who are sticklers for linear
detail will find elements frustrating. Strange to me how they showed
prisoners having their heads shaved while Gallo manages to retain
longish hair and a beard.

Overall, I loved the movie. It left lasting visual images and moral and
human-nature questions to chew on. I will see it again – though I know
it wont be at the local multiplex anytime soon – and it is a movie
which deserves to be seen on the big screen. I would highly recommend
this movie to some people, who's taste I know, but not to others. Gets
points for being anything but formula and for Skolimowski treating the
audience as adults and not needing to lead us narratively by the nose.
It will probably be challenging for it to find its audience as it could
be too meditative for those wanting a Bourne-type action thriller or
war film and too thematically violent for those wanting a more obvious
art film. I thought it had a great and unusual balance.

One culturally specific thing I would note, having seen this in Warsaw,
is that many Poles complained of the depiction of Poles as drunks.
Having spent much time in rural Eastern Europe, the presence of alcohol
with hunters, fisherman, etc actually does appear fairly ubiquitous.
Not a complete picture of the entire population, of course. This
reminded me very much of seeing "Schindler's List" when it was first
released in Poland and the general upset over the portrayal of Poles.

Why this movie was not Poland's entry for the Academy Awards is beyond
me.

TagsAfghanistan Europe Norway
Mysteries of Lisbon
The Other Woman