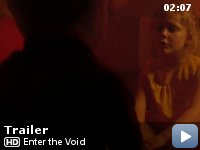 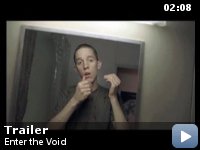 A drug dealer becomes interested in death and re-incarnation after reading "The Tibetan Book of the Dead". Suddenly dead, his soul floats though Tokyo observing the dramas of his friends and foes. An oath determines his next step 'as a soul'.

Storyline
Tokyo's nasty underside, seen primarily through the eyes of Oscar, a heavy drug user, whose sister Linda is a stripper. Oscar also has flashbacks to his childhood when trauma upends the siblings. Oscar's drug-fed hallucinations alter Tokyo's already-disconcerting nights, and after the police shoot him, he can float above and look down: on his sister's sorrow, on the rooms of a love hotel, and on life at even a molecular level. The spectrum's colors can be beautiful; it's people's colorless lives that can be ugly. And what of afterlife, is there more than a void?

Post-production continued till the end of the year 2009.

Crew or equipment visible:
During the first sequence in the "Sex, Money, Power" strip club, the camera and jib/crane are visible in the reflection of the platform the dancers are on.

Linda:
This thing is not my brother.
[Empties Oscar's ashes into the sink]


Gaspar Noé's big beast of a Cannes entrant showed for the first time in
the UK this week in October. Gaspar Noé was there to introduce the
film, which was a great kick for me, even though he didn't do a Q&A.
His intro was quite funny, because he's not a grand intellectual, he's
more of a sensualist. It's clear that he had a pretty dissipated youth
and he talked about his experimentation with hallucinogenics and he
always wondered as a kid why nobody was making movies with the images
like he was seeing whilst high in them. So this is a movie I think he's
wanted to make for a very long time, perhaps a couple of decades, but
only now has he been able to get the freedom and funding to do it.

He said he had seen the film Lady in the Lake after taking a magic
mushroom; this is a 1947 Raymond Chandler adaptation which is shot in
POV (that is, the camera is like the eyes of the lead). Gaspar had also
been reading about life after death experiences, or near death
experiences. So he wanted to combine the hallucinations, POV shooting,
and out-of-body experience material. The result is 2 hour and 43
minutes of masterpiece. It will leave the ciné-gourmand gorged and
bewildered. For me it's a clear step-up, even an evolution, from his
last feature film in 2002, Irréversible. The idea of having out-of-body
experiences really frees up the concept of POV, Noé's not limited by
the body (which can't just glide forty feet into the air, or halfway
across the city). He's really freed up to shoot the fluorescent sexual
labyrinth of Tokyo, which is shot only at night-time and in POV.

The story in the movie concerns a brother and sister (Oscar and Linda)
who have a childhood trauma and end up moving to Tokyo in their late
teens where they become involved in a heaving underworld. I think
though that Tokyo is more of a metaphor in this film, I don't think
he's trying to tell you anything about Tokyo the city per se, I think
it's just the perfect pre-fabricated set for Noé. In the film it's a
nerve centre, it's that place in life where we meet lovers, copulate,
produce new life, and die. It's the mayfly (order Ephemeroptera, from
the Greek for short-lived) part of the human lifecycle, which we
experience in a heightened fashion through the eyes of Oscar.

There's a lot of stuff in here for you to take offence to if you want,
If you have ever taken offence to a film on content grounds as opposed
to intellectual grounds, you're likely to take offence here.
Pornographic linkages between adult sexuality and the Oedipus complex,
for me are brilliant, but will upset many filmgoers.

Those people who have decided that Noé is homophobic or misogynistic
after seeing Irréversible are not going to have their minds changed by
this movie at all. There seems to be a very strong link in his mind
between sex and procreation. You don't have to consume the movie in a
homophobic way in my opinion, but there may be a lot of upset gays
after seeing this movie. Particularly as the gay character in this
movie is portrayed as being on the same level as the rapist in
Irréversible. There's no direct comment, but if you read between the
lines, you may not like what you read.

I think the androphiles are going to love Nathaniel Brown who plays the
lead teen, Oscar, in this movie, which is his first credited role on
IMDb, straight as I am, even I can tell he's a heartthrob. Paz de la
Huerta as Linda, his sister, is very eye candyish too. If you like to
see beautiful things writhing (we're talking eye popping next level FX
hallucinations here, as well as copious sex), then this is the movie
for you.

I walked out of the cinema still tripping, the POV is so spectacularly
well delivered that you feel almost like you're still in the movie when
you come out, because the mode of perception hasn't changed.

The lasting images I am left with are from the Love hotel, a very
strange pastel and fluorescent building that has holo-reflectors design
on the outside and which Noé dedicates a lot of the later part of the
movie to, the FX emanations are spectacular.

TagsCanadaTokyo
The Disappearance of Alice Creed
Survival of the Dead